The Korea Baseball Organization said Thursday it has asked the police to investigate a tip that a player-turned-broker has approached a pitcher to fix matches.

In a press statement, the KBO said it received the tip in early May that the broker, a 20-something undrafted former player, was on the prowl and was looking to engage pitchers in fixing schemes.

And after its own preliminary investigation, the KBO asked the police on May 18 to launch its own probe.

Hours after the KBO's announcement, the Doosan Bears said the player in question was their right-hander Lee Young-ha. The Bears said Lee turned down two phone calls from a broker in April and May proposing a deal to fix games and immediately reported it to the club. He also agreed to disclose his name, the Bears added. 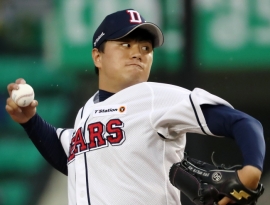 In this file photo from May 29, 2018, Lee Young-ha of the Doosan Bears throws a pitch against the SK Wyverns in the top of the first inning of a Korea Baseball Organization regular season game at Jamsil Stadium in Seoul. Lee said on June 7, 2018, that he`d turned down a gambling broker who proposed a match-fixing deal in April and May. (Yonhap)

According to the Bears, Lee first received a call on April 30 from an unrecognizable number, and the broker at the other end of the line suggested Lee issue a walk in exchange for cash. Lee told the broker not to call him again and blocked that number.

On May 2, Lee got a call from the same broker, who used a different number, and the pitcher told the broker that he'd report the case to the team and the league office.

"We decided to let the KBO know because we felt the broker could approach players on other teams," the Bears said in a statement. "Lee Young-ha made a quick and right decision. Both he and the club fully cooperated with the KBO's investigation."

Earlier in the day, the KBO said it couldn't comment further on which player and club are suspected of involvement, since the police are now looking into the matter.

According to multiple club officials earlier Thursday, the KBO has alerted all 10 teams that the broker was on the loose and could be approaching their players.

Jeong Geum-jo, deputy secretary-general of the KBO and head of its Clean Baseball Center, said players have spoken with their teams' respective Clean Baseball Center representatives regarding their knowledge of the broker and whether they have been approached by that person.

"Our players are well aware of the pitfalls of match fixing," Jeong added.

The KBO has dealt with match-fixing scandals in recent years, leading to convictions of the implicated players.

New Commissioner Chung Un-chan singled out transparency as one of his key objectives when he assumed the post in January this year, but the KBO's credibility took a beating last month, when nine of the 10 clubs were found to have engaged in illegal player-for-cash trades.(Yonhap)