Cows are very giving creatures, producing milk, butter, cheese, beef and more. But in Korea, they are extra-giving, as the cartilage from the bones and knees are also eaten. Adding more to the list, even cows’ internal organs are served as great delicacies, for example, yangdaechang.

Yangdaechang is a mix of yang and daechang, tripe and large intestine, respectively. Though the two are separate parts, they are often enjoyed together as they make a great pair. The excessive fat of daechang gives yang a more delicate taste when cooked together.

Yang is the uppermost part of cow’s four-chambered stomach. Uncooked, a slice of yang is slippery. It may look intimidating, as it resembles a giant white amoeba.

Though yang doesn’t have much flavor, it is often enjoyed for its chewy texture.

As the word yang also means lamb in Korean, many mistakenly think that the organ is from a lamb. But yang, in this sense, is limited to cows and pigs.

Daechang is the large intestine and it resembles a water hose filled with white, opaque bubbles. The bubbles are the fats. The intestine is actually clean on the inside but fat stacks up on the exterior. It is turned inside out when served.

Though daechang is not considered healthy due to its high fat content, the taste is exceptional as the fatty texture melts in the mouth. 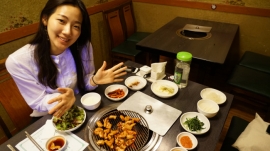 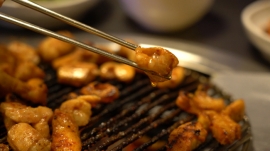 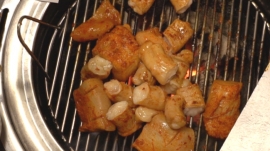 The fat melts away straight in the mouth but daechang’s overall texture is rubbery. It takes up a lot of chewing to fully break the hose-looking part down into bits.

The organs are usually washed thoroughly and marinated with basic condiments to eliminate the distinct odor. Some places ramp up the taste by sprinkling hot pepper powder to the sauce.