[ The Korea Herald – Send E-mail ]
Nanoparticles may be linked to early first period in Korea: study
By Claire Lee
Published : May 29, 2018 - 17:05
Updated : May 29, 2018 - 17:05
Exposure to air pollution, particularly to nanoparticles classified as PM2.5, may cause early first periods among young girls, which is known to increase one’s risk of developing other health conditions, such as breast cancer and early menopause, a new study showed on Tuesday.

Scholars at Ewha Womans University came to the conclusion after researching 639 young girls aged 13-17 who participated in a survey from 2010-2012. Their findings showed that participants’ exposure to nanoparticles was linked with an increased chance of experiencing early menarche, or first menstruation.

Previous overseas studies have already shown that air pollution can have a negative impact on women’s hormonal activity, metabolic syndrome and fertility.

Korea joined the ranks of the world’s most polluted countries last year, with air pollution in the first months of 2017 reaching record levels. An OECD report released earlier this year showed that Korea’s air quality is among the worst among its member countries, particularly due to its high nanoparticles levels. 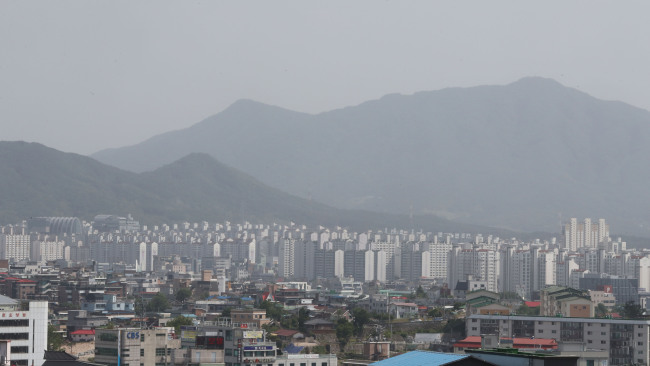 (Yonhap)
Better known as “fine dust” among Koreans, nanoparticles have been classified as a Group 1 carcinogen by the World Health Organization. Also known as PM2.5, the fine particles with a diameter of 2.5 micrometers or less are known to penetrate deep into the respiratory system and can cause a number of health conditions, including cancer.

Researchers at Ewha Womans University claimed that one’s chance of experiencing early menarche increased by 1.08 times per every 1 cubic meter of level increase of nanoparticles in the past year.

“This research shows that young girls may be especially vulnerable to exposure to PM2.5,” said Dr. Ha Eun-hee, a medical doctor and professor at the Ewha Womans University who organized the research.

Researches have shown that girls who start their periods early have an increased risk of a number of illnesses, including breast cancer and depression, partially due to the hormonal upheaval arising from exposure to estrogens at an early age.

Dr. Ha claimed that further research is needed to verify whether PM2.5 can indeed be classified as an estrogen disrupting hazardous air pollutant.

It is not just young girls who are being affected by air pollution. A study last year by New York University School of Medicine found that exposure to air pollution early in one’s pregnancy may increase risk or preterm birth and low weight among the newborns.