North Korea’s state-run newspaper Tuesday urged the United States to suspend its combined military exercise with South Korea, raising speculation over whether the issue would be raised as an official agenda item for the scheduled US-North Korea summit.

In an article titled “Behave along the mood for a dialogue,” Rodong Shinmun said that if the US wants a summit with North Korea, Washington should reconsider holding the upcoming Ulchi Freedom Guardian exercise, which is scheduled for this August.

“The exercise has no benefit to ease tensions on the Korean Peninsula,” the newspaper said. “The exercise is an indicator showing whether the US wants peace or war. … If they proceed with a military drill for invasion, it will put US security at risk.” 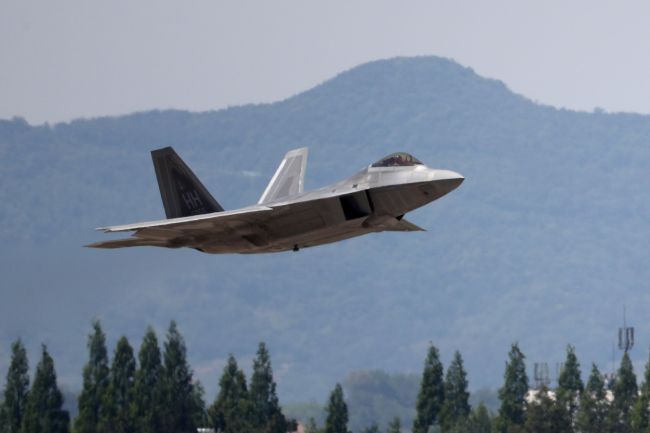 US F-22 Raptor fighter jet takes off at Gwangju airbase during Max Thunder drill in May. Yonhap
The remarks came amid the flurry of diplomacy surrounding the US-North Korea summit, with the two countries’ negotiators working out the agenda and logistics for the high-stakes meeting scheduled for June 12 in Singapore.

Despite the US’ assertion that the combined exercises are annual events and defensive in nature, Pyongyang has long viewed them as a major security threat and denounced the maneuvers as a “war rehearsal.”

During his meeting with a South Korean envoy in March, North Korean leader Kim Jong-un hinted that he would “understand” if the exercises proceeded as planned, but added the nature of the drill should be “adjusted” if the security landscape is “stabilized.”

“Kim Jong-un’s remark is only a conditional acceptance of South Korea-US drills,” said Kim Yeol-su, the head of security strategy at the Korea Institute for Military Affairs. “Now that the US-North Korea summit is back on track, it has raised the issue again.”

South Korea’s Defense Ministry said Tuesday the government has yet to begin official discussions with the US over the exercise, adding that the scope and timeline of the upcoming drill would be similar to those of previous years.

But speculation is rampant that the South Korean and US governments would consider adjusting the scale of the combined drills, including the Ulchi Freedom Guardian, a computer-based war game scheduled to take place in August.

Rep. Kim Hack-yong of the main opposition Liberty Korea Party said the government is trying to keep the drill as “low profile” as possible -- as it did with the recent Key Resolve exercise, which took place in late April after being suspended until after the PyeongChang Olympics.

“From the US’ point of view, the combined exercise is a relatively minor issue that can be adjusted as long as North Korea takes significant steps toward denuclearization,” said Shin Bum-cheol, a senior fellow at the Asan Institute for Policy Studies.

Fueling the speculation is Cheong Wa Dae’s remark Saturday that it would explore ways to resolve North Korea’s security concern by discussing a possible non-aggression pledge by the United States to the North and the start of peace treaty talks.

The comment came after the second inter-Korean summit, during which the two Koreas’ leaders agreed to resume inter-Korean talks, which North Korea suspended over its objection to the combined air drill Max Thunder.

According to the US-led Combined Forces Command, which oversees computer-simulated war games with South Korea’s Joint Chiefs of Staff, there are no major combined drills scheduled until the UFG exercise.

“When North Korea calls for an end to the hostile policy, it is referring to the US military stationed in South Korea, which involves combined drills and the deployment of strategic assets. As North Korea appears not to take issue with the USFK, they will definitely want to resolve the two issues,” said Kim of the Korea Institute for Military Affairs.