Lee Myung-hee, director of Ilwoo Foundation, appeared at the Seoul Metropolitan Police Agency at around 10 a.m.

Wearing dark-colored attire and a blue muffler, she bowed her head and apologized.

"I am sorry for causing troubles. I will cooperate fully with the investigation," she said. She refused to answer any more questions from reporters. 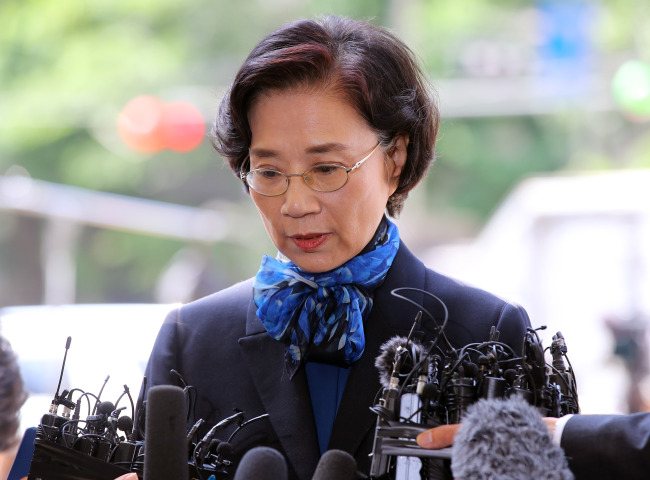 Lee Myung-hee, wife of Hanjin Group Chairman Cho Yang-ho, answers reporters` questions over multiple assault allegations as she appeared for police questioning in Seoul on May 28, 2018. (Yonhap)
Protesters from progressive parties and civic groups chanted while holding pickets that read, "Arrest Lee" and "Cho Family Out."

Lee and her two daughters, including Cho Hyun-ah infamous for the "nut rage" case, are probed over mounting allegations of abuse of power, assaults, tax evasion and smuggling of luxury goods.

The 69-year-old Lee is accused of shoving and cursing at construction workers hired for the expansion of a hotel owned by Hanjin Group, which includes Korean Air, in 2014. She may face a charge of aggravated assault as a witness testified she had hurled scissors at them.

She is also suspected of physically and verbally assaulting workers at her Seoul mansion when it was being remodeled, as well as habitually abusing company employees, private chauffeurs, security guards and housekeepers.

Police have secured statements from more than 10 witnesses who said they want Lee to be held accountable. By law, assault charges cannot be pressed against a suspect unless victims seek punishment.

But police are considering charging Lee with aggravated assaults, in which case, victims' formal complaints will not be required, and she won't be able to avoid a prison term if convicted. (Yonhap)