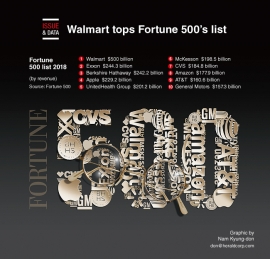 Walmart topped the Fortune 500 list for the sixth straight year and Amazon made the Top 10 for the first time.

The 64th annual Fortune 500 list ranks America’s largest companies, representing two-thirds of the US gross domestic product with $12.8 trillion in revenue. The companies on the list employ more than 28 million people.

Exxon Mobil and Berkshire Hathaway ranked No. 2 and No. 3 on the list with $244 billion and $242 billion each in annual revenue, respectively.

Apple, which was No. 3 last year, dropped to the No. 4 spot this year with $229 billion in annual sales.