US President Donald Trump has not asked the Pentagon to consider reducing troops stationed in South Korea, his top national security aide said Friday, dismissing a news report on the alleged order. 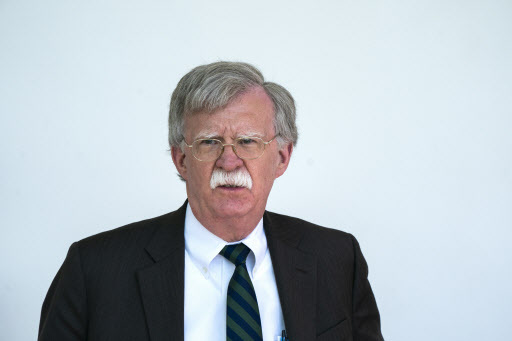 John Bolton (Yonhap)
"The New York Times story is utter nonsense," he said in a statement released by his office. "The President has not asked the Pentagon to provide options for reducing American forces stationed in South Korea."

The report said that the downsizing is not designed as a "bargaining chip" in Trump's talks with Kim, but a peace treaty between the two Koreas could diminish the need for US Forces Korea.

Some 28,500 American troops are currently stationed in South Korea to deter North Korean aggression after the 1950-53 Korean War ended in a ceasefire, not a peace treaty.

In their summit talks last week, South Korean President Moon Jae-in and Kim agreed to work toward a peace treaty by the end of the year.

Trump and Kim are planning to meet in late May or early June to talk about dismantling the regime's nuclear weapons program. In return for denuclearization, North Korea is widely expected to demand concessions.

The US troop presence in South Korea has long been viewed as a threat by the North Korean regime.

The Times also attributed the downsizing order to the ongoing negotiations between Washington and Seoul over how to share the cost of keeping the U.S. forces on the peninsula.

Trump has been determined to withdraw the troops, arguing that the United States is not adequately compensated for the cost, according to the report.

Bolton is scheduled to meet with his South Korean counterpart, Chung Eui-yong, in Washington later Friday.