This is the first time a North Korean leader has set foot south of the border since before the 1950-53 Korean War. 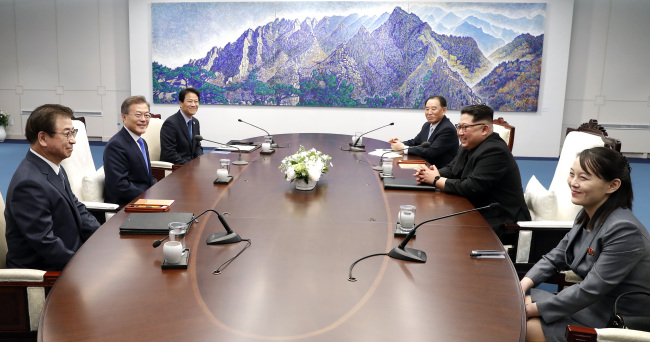 (Yonhap)
At the summit table, Moon was flanked by his chief of staff Im Jong-seok and National Intelligence Service Director Suh Hoon. Kim was accompanied by Kim Yong-chol and his sister Kim Yo-jong.

“(I) walked here with many thoughts, that if we put our will together, the lost 11 years would not have been a waste,” Kim said before the meeting began.

“I am here today with the belief that we are at the starting point of peace and prosperity, that we are firing the signal.”

He went on to say that he hopes to discuss outstanding issues frankly, and that he hopes that discussions with Moon will lead to results that will not lead to the repeating of past failures in inter-Korean agreements.

Moon responded by saying that much is riding on his and Kim‘s shoulders.

Saying that the moment Kim crossed the Military Demarcation Line Panmunjeom became the symbol of peace, Moon praised Kim for his decisions that led to the summit meeting.

”I hope that we engage in the talks with such boldness, and reach an agreement and deliver a gift to all the people of the world who wish for peace,” Moon said.