[ The Korea Herald – Send E-mail ]
Trump’s strike on Syria may distract from NK summit preparations
By Yeo Jun-suk
Published : Apr 16, 2018 - 17:38
Updated : Apr 16, 2018 - 18:52
With the United States and its allies conducting airstrikes on Syria over its alleged use of chemical weapons on civilians, speculation has emerged over how the surprise attack may impact the outcome of the historic summit between North Korea and the US.

Some suggest that the attack on Syria could give more leverage to US President Donald Trump by sending a strong message to Pyongyang, while others predict that North Korean leader Kim Jong-un may use it as an excuse to justify the country’s possession of a nuclear arsenal.

The exact outcome is difficult to predict but one thing is certain: The more the US focuses on its military involvement in Syria, the less attention the Trump administration is likely to give to the summit with North Korea’s leader Kim.

“I’m afraid that the preparations for the US-North Korea summit could be distracted by Washington’s involvement in Syria,” said Hong Min, director of the North Korean studies division at the Korea Institute for National Unification.

“Historically, US involvement in the Middle East has been a protracted, expensive one. … Combined with the shortage of the North Korean experts in the Trump administration, the Syria attack could deflect attention away from negotiations with North Korea.” 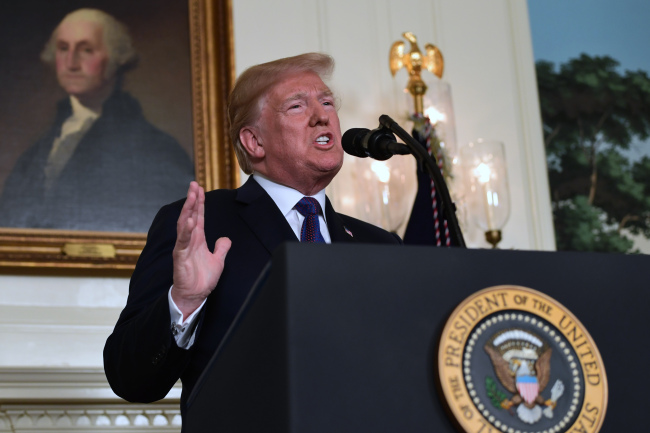 There is also a risk that the diplomatic preparations may be hijacked by political debates over the US attack on Syria’s chemical sites, with some lawmakers criticizing Trump for failing to obtain congressional approval for the military option.

However, such political challenges could eventually encourage Trump to seek a dramatic diplomatic breakthrough with North Korea, prompting him to strike a broader deal with the North’s leader Kim over his nuclear and missile programs, Hong said.

“Given that the Trump administration has only a few accomplishments at home and abroad, it might be more pressured to create a tangible outcome through the summit … and even strike a broader deal with Kim Jong-un,” he said.

Regarding the Syria airstrike’s impact on future nuclear talks, experts said both Pyongyang and Washington are able to exploit the US’ use of a military option as a narrative to build their case for the upcoming negotiations.

From the US perspective, the strike could be a stern warning to North Korea -- which has maintained close military ties with Syria -- that unless Kim gives up his nuclear arsenal he could end up facing military strikes as Syrian President Bashar al-Assad did.

Some analysts in Washington suggested that the attacks on the Syrian chemical weapon depot are an indication that the US would do the same to North Korea, which has reportedly exported chemical weapons to Syria and allegedly used the chemical warfare agent VX on Kim Jong-nam, the half brother of Kim Jong-un.

“The US could target (Kim Jong-un)’s chemical weapons in a similar limited strike missile attack (to that of Syria),” said Stephen Bryen, who served as deputy undersecretary of defense at the Pentagon and director of the Defense Technology Security Administration.

“Given Trump’s decision to strike Syria over its chemical weapons, North Koreans may also expect to hear demands from the US to surrender their chemical weapons and end their production,” he said in an article in the Asia Times.

North Korea, for its part, may present its own counter argument to justify its possession of nuclear weapons -- an ultimate means to ensure the survival of the regime and avoid Kim Jong-un following in the footsteps of Libyan leader Moammar Gaddafi.

Such a belief explains the reason why North Korea has pursued nuclear weapons, and Pyongyang will reinforce its belief that having nuclear weapons reduces the likelihood of US strikes, Rodger Baker, vice president of strategic analysis for the global intelligence firm Stratfor, told CNN.

Despite the advantage of using the attacks as leverage in negotiations, South Korean analysts predicted the implication of the US attack against Syria on US-North Korea nuclear talks would be limited, as the attack is likely to be considered a separate event by the two countries’ nuclear negotiators.

While it is no secret that North Korea has sent missile and chemical weapons to Syria in the past, the North Korea- Syria link is more of a “foregone conclusion” than a significant factor that could change the trajectory of the Kim-Trump summit, they added.

“The chemical weapon connection between North Korea and Syria is a narrative prior to the announcement of the US-North Korea summit. I don’t think it will bring much change to whatever outcome the summit produces,” said Go Myung-hyun, a North Korea expert from the Asan Institute for Policy Studies in Seoul.