With US President Donald Trump and North Korean leader Kim Jong-un officially announcing their first meeting, the focus is now on where would be the ideal place to convene the historic summit to resolve the decades-old nuclear crisis.

In a cabinet meeting on Monday in Washington, Trump said he plans to meet Kim next month or in early June to discuss the denuclearization of North Korea. The North’s state-run media reported Tuesday that Kim made the first official mention of the summit during his meeting with party officials Monday.

The two countries have kicked off their working-level discussions with a focus on determining the location for the summit, prompting a flurry of speculations over which places suit the interests of both the US and North Korea.

One of the candidates is Pyongyang, the capital of North Korea. It is a place favored by North Korea and possibly Donald Trump, who might want to create a grandiose image of being a peacemaker despite security concerns over a trip to North Korea, experts said. 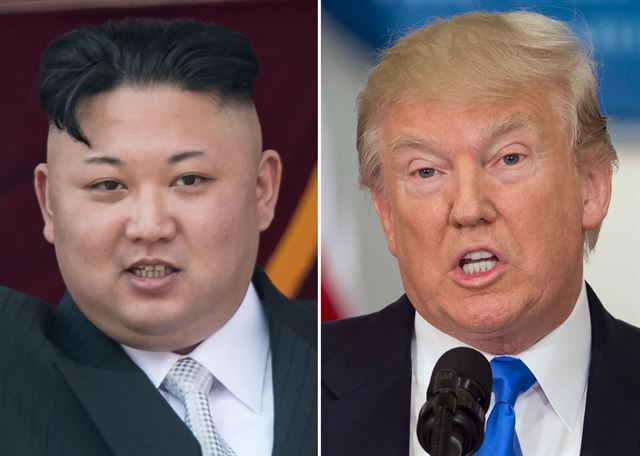 North Korea`s leader KIm Jong-un and US President Donald Trump. Yonhap
“Visiting Pyongyang would create a theatrical effect that Trump wants. I don’t think he would be afraid of going to Pyongyang. It could create the show he wants,” said Go Myung-hyun, a North Korea expert from the Asan Institute for Policy Studies in Seoul.

Citing officials from the Trump administration, CNN reported Saturday that North Korea was pushing to have the meeting in Pyongyang, although it is unclear whether the White House would be willing to hold the talks there.

The North Korean capital has been the venue of high-level meetings between the US and North Korea. Former President Jimmy Carter had visited it multiple times. Former President Bill Clinton also visited Pyongyang in 2009 and met with the North’s former leader Kim Jong-il, father of Kim Jong-un.

Another potential location is the truce village of Panmunjeom in the Demilitarized Zone between the two Koreas, where the inter-Korean summit is scheduled to take place on April 27 at the Peace House on the southern part of Panmunjeom.

“Given the security details involved with the high-stakes summit, I think Panmunjeom is still the most likely venue for holding the US-North Korea talks,” said Kim Dae-young, a military analyst at the Korea Research Institute for National Strategy in Seoul.

Straddling the line dividing the two Koreas, Panmunjeom has been the venue for occasional inter-Korean meetings at a small conference room inside the Joint Security Area. The latest meeting was for talks about establishing a direct telephone line between Kim Jong-un and South Korean President Moon Jae-in.

Following Trump’s acceptance of Kim’s invitation for a summit, the New York Times cited a senior US department diplomat as saying “the most obvious” venue is the Peace House. The conference building is currently under renovation for the inter-Korean summit.

If the US and North Korea are reluctant to hold their first summit either in North Korea or any other place on the Korean Peninsula, a neutral place in a third country could present an alternative to meet both parties half way.

Among them are Ulaanbaatar, the capital of Mongolia. Since its democratic revolution in 1990, the Central Asian country has pursued political neutrality and maintained friendly relations with both North Korea and the US.

Former Mongolian President Tsakhiagiin Elbegdorj tweeted an offer to meet at Ulaanbaatar, describing his country as “the most suitable neutral territory.” He also alluded to the fact that Mongolia has arranged important meetings with North Korea, including one with Japan.

The Mongolian capital also offers a geographical advantage to the North Korean leader. It would only take a flight over Chinese territory from North Korea, if its reclusive leader Kim were to choose to travel by his own private plane, which is suspected of being too outdated for a long flight.

Still, there are possibilities that some other place could be chosen for the venue, as history shows that high-profile summits have sometimes taken place in a small town, such as the 1986 Reykjavik Summit between the US and former Soviet Union held in the capital of Iceland.

“It’s anyone’s guessing game … who knows if the summit could take place on a ship in international waters or even on the deck of USS Theodore Roosevelt aircraft carrier,” analyst Kim Dae Young said.