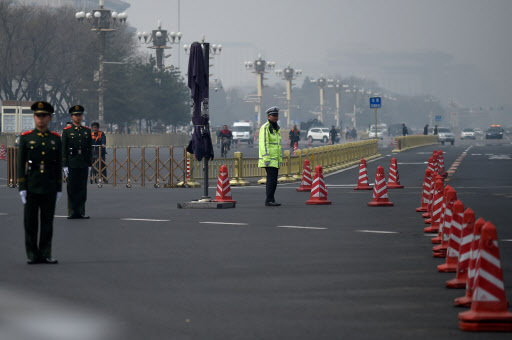 Tight security is seen in Beijing on Tuesday. (Yonhap)
Mending ties appear to be in their mutual interest, as Kim plans to hold a summit with South Korean President Moon Jae-in in late April and a meeting with US President Donald Trump before the end of May.

North Korea needs China’s backing to survive whatever the result of the Pyongyang-US summit may be, said Chung Jae-hung, a researcher at the Sejong Institute.

“North Korea needs an ally ahead of the planned meeting with the US, as the talks could be unsuccessful,” he said. “Amid such uncertainties, I think the North had to discuss ways to secure its regime survival with China, riding on the momentum of dialogue with the US and South Korea.”

China, for its part, may be worried about losing influence over Pyongyang and being sidelined in the North Korea denuclearization process on the back of fast-paced diplomatic exchanges among Seoul, Pyongyang and Washington, he said.

“It is a win-win for China, too. With China’s President Xi Jinping tightening his grip over the country, his next challenge is to expand his clout on the matter of the Korean Peninsula,” Jung said. China’s parliament unanimously re-elected Xi as president earlier this month, and the National People’s Congress, which recently ended its 16-day meeting, revoked term limits for Xi.

Relations between Pyongyang and Beijing have been strained, as China enforced international sanctions against North Korea over the reclusive regime’s pursuit of nuclear and missile programs. North Korean exports of coal, seafood and other sources of currency have been hampered by the sanctions.

Koh Yu-hwan, a professor at Dongguk University, said that a meeting between a North Korean high-level official and Chinese leaders was an expected step, citing Kim’s father Kim Jong-il’s visit to China ahead of the first-ever inter-Korean summit in 2000.

“Given North Korea’s traditional relationship with China, it could not just ignore China ahead of an important event,” he said. “North Korea seems to believe it could play a role between China and the US in the face of a growing rivalry between the countries.”

Another expert said the North’s willingness to repair ties with China signals it is not willing to completely denuclearize and has low expectations for the upcoming summit with the US.

“I think North Korea knew that it could improve ties with China if it offers to talk to the US on denuclearization,” said Kim Hyun-wook, a professor at the Korea National Diplomatic Academy.

“Without the willingness to completely denuclearize, North Korea would want to have China ease sanctions against it to survive through the sanctions regime in case the summit with the US falls through,” he said. “Basically, the North is using the rift between the US and China, which are in a trade war and fighting for clout in the region.”

Professor Kim also pointed out that Trump filling his foreign policy team with hard-liners could be a factor in North Korea seeking to mend ties with China.

Trump tapped John Bolton as his new national security adviser. The former US ambassador to the United Nations is known for his hard-line stance advocating the use of military force against North Korea.

Trump also replaced Secretary of State Rex Tillerson with Mike Pompeo, director of the Central Intelligence Agency. Pompeo is similarly seen as a hard-liner who has floated the possibility of a strike against North Korea as well as a regime change.