[ The Korea Herald – Send E-mail ]
‘Lending ears to scholars can rationalize diplomacy’
By Joel Lee
Published : Mar 27, 2018 - 00:06
Updated : Mar 27, 2018 - 09:17
Over the last week, Pradeep Taneja, who lectures on international relations at the University of Melbourne in Australia, toured Korea and witnessed its sound economy and tense security.

Taneja, along with 10 scholars and researchers from Australia, visited the Ministry of Foreign Affairs and Ministry of Unification, National Assembly, National Diplomatic Academy, Australian Embassy and Asan Institute for Policy Studies, among other destinations, in a program jointly organized by the Korea Foundation and Australian Institute of International Affairs.

“I especially benefited from interacting with officials from the Ministry of National Defense and Ministry of Foreign Affairs, as well as scholars from the Asan Institute and National Diplomatic Academy,” Taneja, whose research has focused on China and India and the relationship between democracy and development, told The Korea Herald. 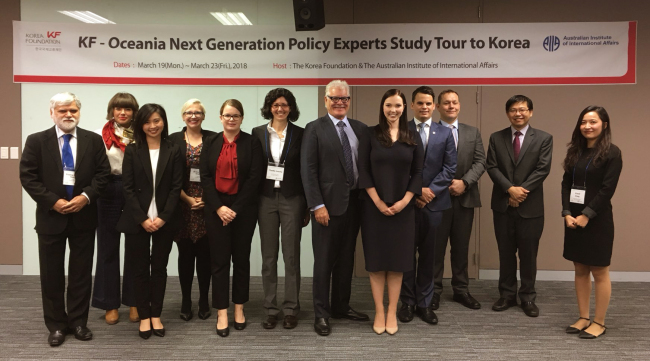 Scholars and researchers from Australia through the Korea Foundation’s Next Generation Policy Experts’ Study Tour of Korea pose during a visit here last week. (Korea Foundation)
“The Korean Peninsula is one of the flashpoints in the Indo-Pacific region. If not handled properly, the relations between the two Koreas could endanger the peace and stability that has underpinned Northeast Asia’s remarkable economic development. Developments in this part of the world provide us with insights that help illustrate key international relations concepts, and contribute to developing theories.”

Joining Taneja on the trip, titled “Next Generation Policy Experts’ Study Tour of Korea,” were John Goodlad, a former Australian diplomat and president of the Australian Institute of International Affairs; Sow Keat Tok, a research fellow and lecturer at the University of Melbourne’s Asia Institute; Claudia Astarita, a nonresident fellow at the Asia Institute; and Bec Strating, a lecturer of politics and philosophy at La Trobe University.

“Scholars contribute to diplomacy by taking a longer-term view of international developments and putting them in a broader social, political and economic context,” explained the scholar. “Being detached from day-to-day affairs of the state, scholars can look at international developments in a more rational manner. Insights drawn from academic research can help diplomacy practitioners examine wider consequences of their actions.”

Noting that Australia and South Korea are both middle powers relying on their diplomatic and security partners to protect and advance their interests, Taneja argued the two countries can achieve “much more” by working together and with other states across the Indo-Pacific region -- a concept describing the evolving economic order surrounding the Indian Ocean’s tropical waters, the western and central Pacific Ocean and the Southeast Asian seas.

“The Indo-Pacific concept, about which Korea still seems a little wary, will help countries maintain a balance of power in this important region, while contributing greatly to the global economy,” he said.

“The postwar security architecture, which was based on a network of bilateral alliances between the United States and its partners, is no longer suitable in today’s world. The region needs a new security architecture that is more open, democratic and cooperative. The Indo-Pacific concept has the potential to ultimately lead to the development of such an architecture.”

Goodlad, who works as an investment adviser at Hartleys, said the delegation leaves Korea “with a much deeper understanding of its unique place in the region, its profound economic development, its culture and history, and the prospects for peace and unification.”

“Australia is Korea’s like-minded country with shared interests and values. The Korea Foundation has ensured that there is another generation of Australians who understand the country and can share their deeper knowledge after returning home,” he said.

“Although South Korea lags behind advanced countries and our neighboring countries in terms of operational budget, our program has concentrated on opinion leaders in various countries, helping them form a balanced view on the Korean Peninsula that incorporates our national concerns,” Lee explained.

“We explain our diplomacy, security and unification policies and provide networking opportunities with related experts and officials. We expect they will play a positive role in future diplomacy as people with keen inclinations toward our country.”

Over 170 people from Europe, Southeast Asia, Oceania, Russia, Japan and China have participated in the program since it began in 2015.