North Korean leader Kim Jong-un seems to have about-faced on two key issues of the South Korea-US military drill and denuclearization, but experts warn that his abrupt shift in stance may merely be the young ruler’s “subtle” diplomacy style. 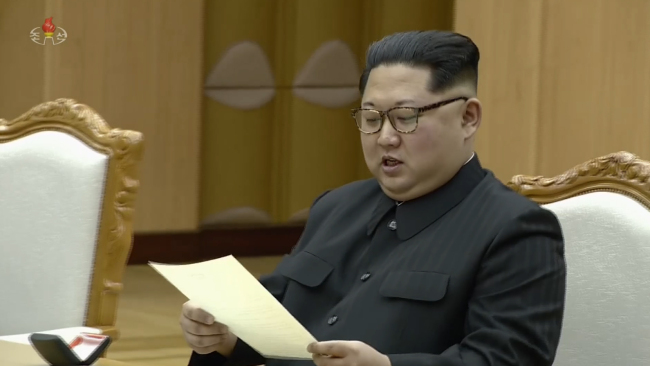 North Korean leader Kim Jong-un reads a letter from South Korean President Moon Jae-in. (Yonhap)
National Security Office chief Chung Eui-yong, who led a South Korean delegation of special envoys on a two-day trip to North Korea, said Tuesday that Kim had said he “understands” the resumption of the joint military drills in April, which he expects to be carried out on a similar scale to that of previous years.

This is a noticeable shift from Pyongyang’s bombastic criticism of such exercises, which it views as a dress rehearsal for invasion, despite the allies’ reiteration that they are purely defensive in nature.

“Kim Jong-un’s remarks can be interpreted as more of an understanding of South Korea’s efforts to delay the drills -- which North Korea views as a key US hostile policy against the regime -- rather than an actual acceptance of the drills itself,” Hong Min, director of the North Korean studies division at the Korea Institute for National Unification, told The Korea Herald.

To bring North Korea to the Feb. 9-25 PyeongChang Winter Olympics, the United States agreed to Seoul’s proposal to push back the exercises, whose initial schedule coincided with the sporting event.

The exercises are expected to be carried out in April, according to Seoul officials.

“It may be hinting its hopes to either halt or downscale other scheduled exercises that are slated to take place after the April exercises including Ulchi-Freedom Guardian drills later this year, as inter-Korean ties improve and Washington-Pyongyang dialogue develops,” Hong added.

While expressing his intentions to talk with the US over his country’s nuclear weapons program, Kim also dubbed denuclearization as “a teaching of his ancestors,” a sharp contrast to his New Year’s address in which he called the completion of the nuclear program a “historical task.”

For years, North Korea has said it was unwilling to talk about the issue of denuclearization, which the US has set as a precondition for dialogue.

“The reason Kim described denuclearization as the “teaching of his ancestors’ (North Korea’s founding leader and his grandfather Kim Il-sung and his father Kim Jong-il) is to hint that Pyongyang’s main goal is to be acknowledged as a ‘normal state,’ rather than as a ‘nuclear state,’” Hong said.

The Seoul-based expert said that previous North Korean leaders’ goals were also to use the nuclear weapons program as leverage to prevent a regime collapse.

A US expert also pointed out the importance to understand the true motive behind Kim’s new stance.

“It’s not clear whether North Korea‘s conciliatory gesture is an effort to seek relief from the maximum pressure campaign, an effort to create a fissure in the US-(South Korea) alliance, or something that was planned all along once it had completed its nuclear force development -- it could be all of the above,” Frank Aum, Senior Expert on North Korea at US Institute of Peace said.

Kim’s style of diplomacy had remained largely unknown until Chung’s recent meeting with the young dictator. Chung, who talked with Kim for nearly four hours, described Kim’s style as “frank and bold,” according to a Cheong Wa Dae official, citing unnamed members of the delegation.