[ The Korea Herald – Send E-mail ]
Text of special envoys’ statement after NK trip
By Yeo Jun-suk
Published : Mar 6, 2018 - 21:05
Updated : Mar 6, 2018 - 21:05
Following is an unofficial translation of the statement issued by South Korea’s special envoys to the North on their return from a two-day visit to Pyongyang, during which they met North Korean leader Kim Jong-un. 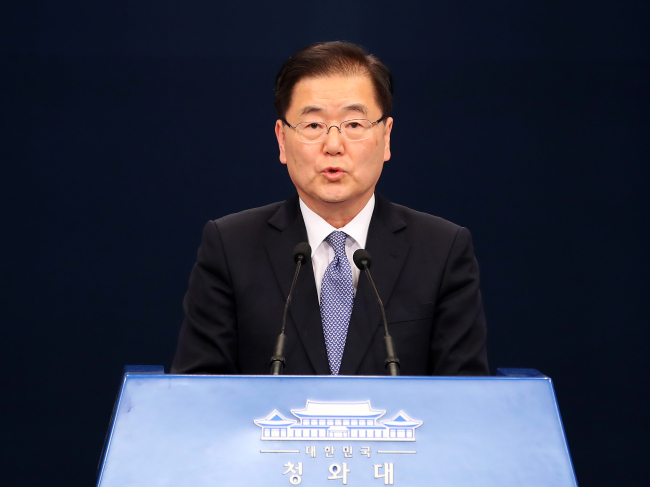 Chung Eui-yong, chief of the National Security Office (Yonhap)
1. The two Koreas agreed to convene the third inter-Korean summit at the Peace House of Panmunjeom in late April. To achieve this, the two parties agreed to hold working-level consultations.

2. In order to ease military confrontation and foster further consultation, the two Koreas agreed to establish a hotline between the two countries’ heads of state.

3. North Korea showed its resolve for denuclearization of the Korean Peninsula. The North also made clear that there is no reason for them to possess nuclear weapons as long as military threats to the North are eliminated and the regime’s security is guaranteed.

4. North Korea expressed its willingness to begin earnest negotiations with the US to discuss denuclearization issues and normalize North Korea-US relations.

5. North Korea made clear it will not resume strategic provocations such as additional nuclear tests or ballistic missile tests while the dialogue continues.