[ The Korea Herald – Send E-mail ]
Allison Hooker: Low-key figure who could pave way for US-NK talks
By Jung Min-kyung
Published : Feb 24, 2018 - 18:57
Updated : Feb 24, 2018 - 18:57
Although Ivanka Trump may not have any plans to meet any North Koreans, someone else in her team might be gearing up for a meeting with representatives from the reclusive nation. 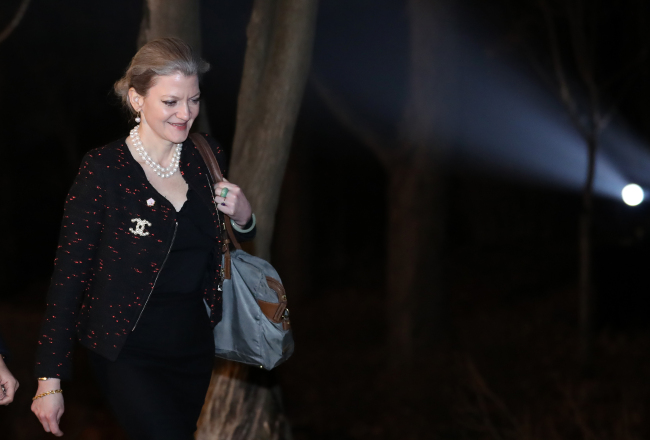 Hooker, a former East Asia and Pacific affairs analyst with the US State Department Bureau of Intelligence and Research, is part of the delegation led by Trump that arrived in South Korea on Friday for the closing ceremony of the PyeongChang Olympics.

Washington, however, initially left her name off the delegation list when relevant announcements were made. It is unknown whether her visit was meant to be classified or just that she was a last minute addition.

When Hooker was director for Korean affairs at the NSC in 2014, she accompanied James Clapper, then-director of National Intelligence under the Barack Obama administration, in visiting North Korea to negotiate the release of two American detainees.

Hooker also accompanied Ivanka Trump at the dinner hosted by President Moon Jae-in in the presidential Cheong Wa Dae on Friday, according to a Cheong Wa Dae official.

Although there are expectations over Hooker’s presence here, experts are also expressing skepticism over chances of any “direct talks” between Hooker and Kim.

“It is difficult to see Hooker as a counterpart of Kim in terms of their positions within their respective governments,” Shin Beom-chul, a professor at the Korea National Diplomatic Academy in Seoul told YTN.

“But she could talk to other members of the North Korean delegation, which could lead to (a possible high-level meeting between Washington and Pyongyang) in the future,“ Shin added, hinting there could be unofficial talks on the sidelines of the Olympics.

But overall, even with Seoul’s mediation, the road to US-North Korea talks is forecast to be a rocky one, with the US slapping its “heaviest” sanctions yet on Pyongyang on Friday. The US Treasury sanctioned one person, 27 companies and 28 ships, according to a statement on the US Treasury Department’s website.

During her meeting with Moon at Cheong Wa Dae, Ivanka Trump reaffirmed Washington’s commitment to its maximum pressure campaign against North Korea “to ensure that the Korean Peninsula is denuclearized.”

There is also the precedent of North Koreans pulling out at the last minute from a Seoul-arranged meeting with US Vice President Mike Pence at the opening ceremony of the PyeongChang Games earlier this month.

Seoul‘s Unification Ministry said in a recent report to the National Assembly that the US and the North do not reject dialogue itself but that they’ve failed to narrow their differences over conditions for opening talks.