[ The Korea Herald – Send E-mail ]
[PyeongChang 2018] Ivanka Trump to meet Moon, but not NK officials
By Ock Hyun-ju
Published : Feb 22, 2018 - 09:22
Updated : Feb 22, 2018 - 22:29
Ivanka Trump, US President Donald Trump’s daughter and senior adviser to the White House, will meet with South Korean President Moon Jae-in on Friday as part of her four-day visit here to attend the finale of the PyeongChang Winter Olympics.

Trump is set to arrive Friday on a commercial flight and dine with Moon and the first lady at Cheong Wa Dae in the evening, according to US officials. She is scheduled to cheer on Team USA at the Olympics and watch some of the events on Saturday and Sunday, but has no plans to meet with either North Korean officials or defectors, they added.

“I am honored to lead the US delegation to the closing ceremonies of the PyeongChang 2018 Winter Olympics,” Ivanka Trump said in a statement released by the White House. 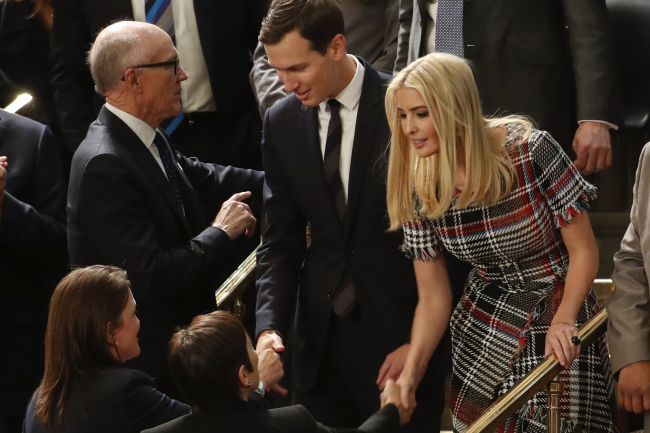 (AP-Yonhap)
Trump will be provided with a “considerable” level of security and courtesy, the Foreign Ministry said in a regular briefing Thursday. Trump will have dinner with Moon at Sangchunjae, a scenic hanok, the traditional Korean home inside the presidential office where her father had dined during his state visit to South Korea in November. The venue is typically used to host heads of state.

While she is in South Korea, an eight-member North Korean delegation headed by Kim Yong-chol, vice chairman of the ruling Workers’ Party of Korea, will also be here to attend the closing ceremony of the Olympics and possibly to meet with President Moon.

Speculations are abounding as to whether US and North Korean delegates may meet on the sidelines of the sporting event, though officials from the US and South Korea have dismissed the possibility.

“Ivanka Trump is the closest person to President Donald Trump, but it seems to me there is no one in the US delegation who has diplomatic authority to engage with North Korea during their visit,” J. James Kim, a research fellow at the Asan Institute for Policy Studies, told The Korea Herald.

“The US and North Korea could make contact, but there will be no diplomatic change or breakthrough,” he said.

Trump’s visit comes amid hopes that the first daughter could play a moderating role in the White House’s bellicose approach to North Korea, as Seoul seeks to use the momentum created by a thaw in inter-Korean relations to encourage direct talks between Washington and Pyongyang.

The North’s high-level delegation, including North Korean leader Kim Jong-un’s sister Kim Yo-jong, and US Vice President Mike Pence were reportedly in talks to meet on Feb. 10 in Cheong Wa Dae when they were both here for the opening ceremony of the Olympics.

But the North’s delegation canceled the meeting at the last minute. Speculations are ripe that Pyongyang was unhappy with Pence highlighting human rights abuses under the Kim regime and pushing for tougher sanctions against Pyongyang.

Woo Jung-yeop, a research fellow at the Sejong Institute, said the Moon administration should use Trump’s visit as a chance to deliver its position to the US.

“Given President Trump relies on a handful of associates around him, it would be important for the Moon administration to focus on delivering our side to her, particularly on such issues as trade,” he said. “On North Korea nuclear issue, North Korea and the US remain firm about their respective positions. South Korea should not rush to lead them into dialogue.”

Amid growing uncertainties, the message Trump will bring back to the US, if any, is expected to be a watershed in the dynamics on the Korean Peninsula after the Olympics.

There are mounting concerns that a breakthrough in inter-Korean relations will not lead to resolving the nuclear standoff and tensions will resurface unless the US and North Korea sit down for talks.

The US’ growing protectionism has also become a headache for South Korea. The US announced plans to impose anti-dumping tariffs of up to 50 percent on large washing machines and solar cell imports from South Korea. It is now considering whether to levy heavy tariffs on South Korean steel imports.