According to State Department spokeswoman Heather Nauert, Pence agreed to meet Kim Yo-jong and other North Korean officials, but the planned “brief meeting” scheduled for Feb. 10 was called off at the last minute by the North.

Kim Yo-jong is the younger sister of North Korean leader Kim Jong-un, and met with South Korea’s President Moon Jae-in on Feb. 10 as her brother’s special envoy. At the meeting, Kim Yo-jong invited Moon to Pyongyang on her brother’s behalf. 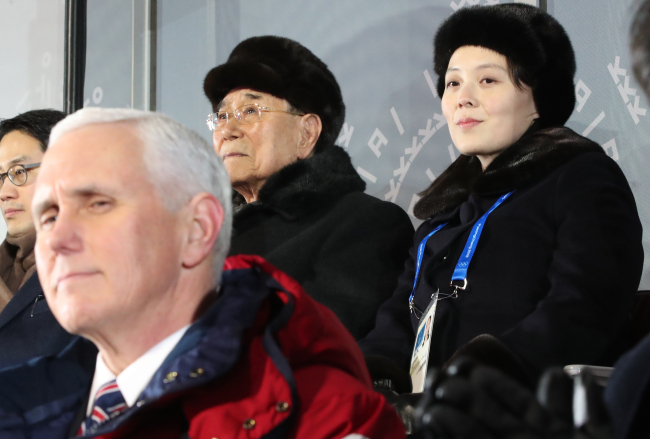 According to Nauert, Pence had planned to use the meeting to “drive home the necessity of North Korea abandoning its illicit ballistic missile and nuclear programs.”

Reports citing Pence’s office said the meeting was called off less than two hours before its scheduled start, and that North Korea expressed dissatisfaction at Pence’s earlier statement regarding further sanctions on the country.

Ahead of his visit to South Korea, Pence met with Japanese Prime Minister Shinzo Abe, and revealed that the US would roll out its “toughest and most aggressive” sanctions in the near future.

While South Korea’s presidential office declined to comment, saying “there is nothing to officially verify,” the development bodes ill for Seoul’s hopes for US-North Korea engagement.

Following North Korea’s announcement of its participation in the Olympics, Moon repeatedly stressed the need for Seoul to use the opportunity to facilitate US-North Korea talks.

“It is likely that the North Korean delegation and Pence had a clash of agendas,” Cha Du-hyeogn, a visiting research fellow at the Asan Institute for Policy Studies, said. He added that the likelihood of the US and North Korea arranging the meeting without Seoul’s involvement is very low.

Cha also said that the US has maintained a consistent position on the matter.

“The US position is that possibility of talks remains open, but if (the North) wants a meaningful dialogue it must show sincerity about denuclearization.”

North Korea, meanwhile, has accused the US of raising tensions on the peninsula, and said that its delegation had no intention of meeting Pence.

North Korea claimed through state-run daily Rodong Shinmun on Jan. 17 that its delegation had no interest in meeting Pence. The paper also accused the US vice president of “thuggery,” citing his meeting with North Korean defectors and the visit to the wreck of the South Korean corvette Cheonan during his visit.

Such actions, experts say, are part of North Korea’s strategy for gaining advantages in possible talks.

“(Potential) meetings now are for testing the grounds. Ultimately, if the US puts denuclearization at the top of the agenda (when the two sides meet), Kim Jong-un would not want such discussions,” Korea Institute for National Unification researcher Park Young-ja said.

“North Korea wants the South to moderate the agenda, and to bring results. North Korea (wants) denuclearization off the table in the initial meetings (with the US).”