A task force under the Financial Services Commission, steered by the watchdog‘s vice chairman Kim Yong-beom, said that from 2019, an accountant in an auditor’s report must include key audit matters such as risks from revenue recognition, as well as clients’ actions after they experienced irregularities like a lack of liquidity, indebtedness of their customers or a breach of contract. 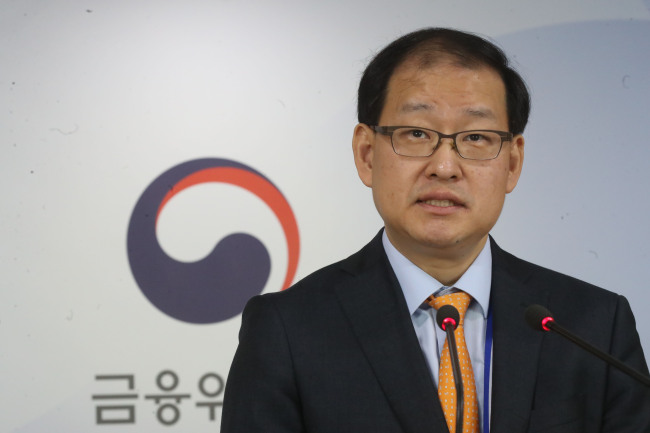 Park Jung-hoon (Yonhap)
The measures will be applied partially to some 150 listed firms holding assets of over 2 trillion won ($1.84 billion), or roughly 1 percent of all firms on the stock market, in making 2018 audit reports in 2019. Listed firms with assets of over 100 billion won, taking up over 13 percent, will be under the measure the following year, and the measure will expand to all listed firms in 2021.

The unveiled plans also included setting a minimum length of period for audits, as well as disclosing real names of external auditors.

If implemented, the measures will ensure transparency in accounting and help accountants escape the role of the “yes man,” according to the FSC.

This was part of the accounting reform, which came in the wake of the revision of the Act on External Audit of Stock Companies, Certified Public Accountant Act and Capital Markets Act passed the parliament.

The ongoing move by the top financial regulatory body, designed to encourage accountants to leverage their audit efforts, will help “cope with lurking issues in the Korean financial market as a whole and lay the groundwork for financial policymaking,” said Park Jung-hoon, head of Capital Markets Bureau at the FSC, in a press briefing Thursday.

“The role of external auditors will not be limited to correction of doctored books,” Park said.

Following the measures, external auditors would be able to evaluate and disclose management risks of client firms pre-emptively, he added.

Under discussion are six more measures, including the introduction of an auditor registration system. Park, however, declined to disclose the ongoing discussions regarding the system. It is drawing concern that small accounting firms might be met with a toughened entry barrier for auditing listed firms.

To flesh out measures dubbed a Korean equivalent of Sarbanes-Oxley Act, a sweeping accounting reform in 2002 aimed at investor protection in the United States, the task force is slated to hold its fourth meeting on Friday and set out details early next year.