US President Donald Trump’s first state visit to South Korea has drawn an unexpected level of attention from Japan, with the country accusing Seoul of inviting a “comfort woman” to its dinner banquet with Trump and serving shrimp caught near a disputed island.

Lee Yong-soo, the 88-year-old woman who was coerced into working as a sex slave for the Japan military during World War II, was invited to the state banquet attended by Trump and South Korea’s President Moon Jae-in on Tuesday.

Trump was even photographed giving Lee a hug when her name was announced inside the hall of the presidential office of Cheong Wa Dae. In 2007, Lee testified before the US Congress about Japan’s brutal treatment of sex slaves. 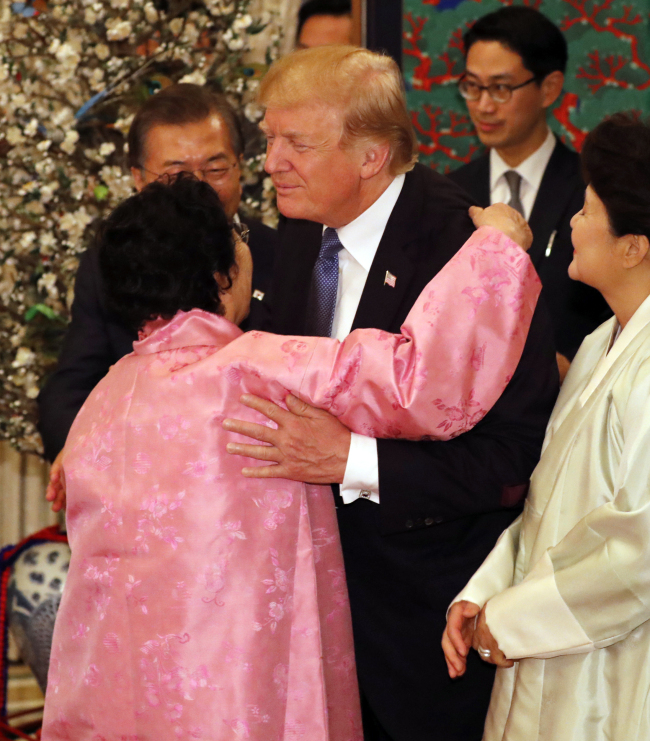 US president Donald Trump gives a hug to Lee Yong-soo, 88-year-old women who was coerced into working as a sex slave for the Japan military during World War II. Yonhap
“Lee’s invitation was designed to deliver a message to Trump and ask him to have a balanced view of the comfort woman issue and historical dispute between South Korea and Japan,” a Choeng Wa Dae official said under the customary condition of anonymity.

Japan‘s wartime sex slavery of Asian women, mostly Korean and Chinese, has been a thorn in korea-Japan relations for decades. An agreement signed by South Korea and Japan in 2015 was intended to settle the matter, but the victims’ groups objected to it and the issue remains highly controversial.

Another flashpoint came when the attendants were served with a dish of shrimp said to have been caught in waters near Dokdo -- a set of islets in the East Sea that have been the subject of a territorial dispute with Japan.

Japan’s Chief Cabinet Secretary Yoshihide Suga said he relayed his concern to South Korea over its decision to invite a comfort woman and serve “Dokdo Shrimp,” criticizing that it would hamper trilateral cooperation between South Korea, Japan and the US.

“South Korea and Japan signed the agreement to resolve the comfort woman issue in a final and irrevocable manner,” Suga said in a regular press briefing on Tuesday, according to Kyodo News. “We will consistently urge South Korea to abide by the deal.”

Trump arrived in South Korea on Tuesday for a two-day visit following his three-day trip in Japan. He flew to Beijing on Wednesday for a summit with the Chinese leader Xi Jinping.