Ramsay is to arrive at Incheon Airport on Nov. 17 for a four-day trip here. 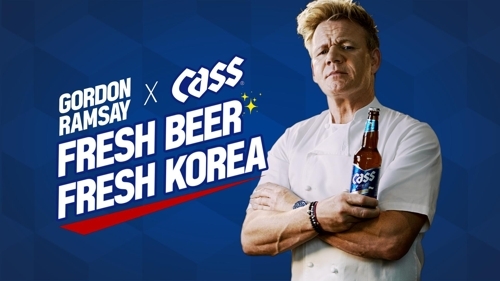 (Oriental Brewery)
During his visit, Ramsay will join a meeting with young people around Hongik University, a hip neighborhood frequented by the younger generation, to share his thoughts on food and beer culture here.

The British celebrity chef was selected as a brand spokesperson for Cass in September this year and appears in local print advertisements and television commercials.

Ramsay has earned a total of 16 Michelin stars across his several restaurants. He is known around the globe for TV series including “Hell’s Kitchen,” “Master Chef” and “Kitchen Nightmares.”