As visitors in VR goggles walk around the park’s 100,000-square-meter Blood City, they are immersed in a world of horror with bleeding zombies and ghosts appearing out of nowhere.

Taking the experience up a notch is a dark, wooden hut, where a VR-equipped visitors paw the air to complete a mission to find a cursed doll as part of a story on the virtual set.

Through the goggles, the room looks more eerie as it shows rusty, bloodstained closets and furniture with spooky sound effects.

“It felt as if I was actually inside a haunted house,” a visitor in her 20s said as she left the room. “The doll looked like Chucky (from the movie ‘Child’s Play’) in the VR and the sound really spooked me.” 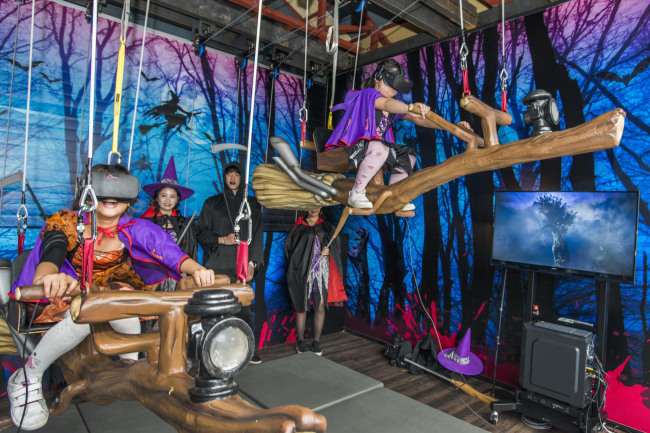 Visitors board the flying broom ride wearing virtual reality headsets at Haunted House in the Everland amusement park in Yongin, Gyeonggi Province. (Everland)
Another VR attraction on the second floor provides visitors a chance to become a witch riding a flying broom.

In partnership with Korean robot startup Sangwha, the amusement park is running Gyro VR and Robot VR, which visitors can experience being a fighter pilot and a robot respectively on moving seats, wearing Samsung Gear VR goggles.

“With VR, we can provide a diversity of immersive content and experiences in limited spaces,” said Park Tae-hyun, senior official at attraction planning team at Everland. “Our VR attractions will continue developing with more thrilling and realistic stories.”