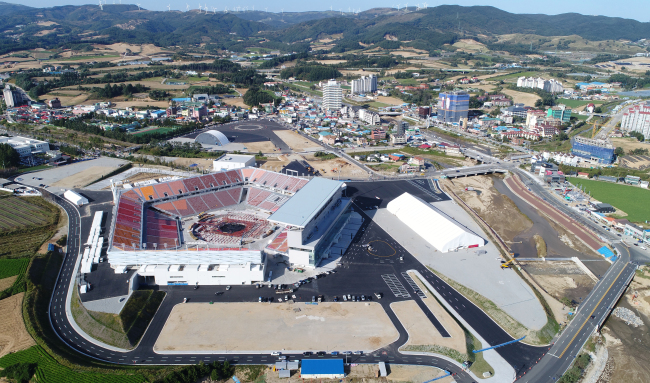 The stadium for the opening and closing ceremonies of the 2018 PyeongChang Winter Olympic Games is seen in this Sept. 29 photo. (Yonhap)
Sales of tickets to the Paralympic Games are even more dismal, with only 4.2 percent sold.

Concerns have been mounting that the PyeongChang games might fail to attract international and local spectators, as inter-Korean tensions are rising with North Korean leader Kim Jong-un stepping up both verbal threats and efforts to develop the country’s nuclear and missile programs.

Last month, French media reported that its national team was considering pulling out of the event, although French sports authorities later clarified that that they had not considered it.

Addressing safety concerns, Do Jong-hwan, Korea’s minister of culture, sports and tourism, told a group of diplomatic mission chiefs from 23 countries that the upcoming games would be “one of the safest ones ever.”

However, getting the Korean public interested in the PyeongChang Olympics appears to be the bigger problem, as indicated by ticket sales. Winter Games are not popular in Korea, where there are only two semiprofessional ice hockey teams in the whole country.

According to the event’s organizing committee, 17.2 percent of ice hockey tickets have been sold. Events like luge and Nordic combined are even less popular, with ticket sales hovering around 11.5 percent and 13.4 percent, respectively

In addition to the games being unpopular, skyrocketing costs for accommodations are also hindering people from visiting PyeongChang county and Gangneung city in Gangwon Province.

According to a figure released by Rep. Yoo Eun-hae of the ruling Democratic Party, the average cost of lodging in Gangneung and PyeongChang has jumped threefold.

Eighty-eight percent of the hotels, motels, inns and guesthouses in the area do not have a single room booked during the Olympic period.

Despite the bleak sales so far, the organizing committee said there was no reason to be worried.

“We expect most of the ticket sales to occur two to three months before the event. Many Koreans tend to put off getting tickets until the last minute, and we believe that offline sales will be considerable,” said a committee official.

He added that the committee is preparing promotional events to coincide with the Olympic torch relay in Korea, which will be held from Nov. 1 to the opening ceremony on Feb. 9. The torch relay kicks off on Oct. 23 in Greece, where it will travel for eight days.

The official added that sales are not as terrible as they seem, as only about 570,000 tickets have been released so far. Total ticket sales stood at 324,392 as of Wednesday.

However, many remain concerned. “From ticket sales to lodging, all indicators related to the Olympic Games are sluggish. We all need to take this situation seriously,” Yoo said.

Gangwon Province Gov. Choi Moon-soon told local media that the Olympic committee is having trouble getting sponsors for the event, saying he is worried that Korea may face “global humiliation.”

Choi said the entire country needs to pull together for the success of the Olympic Games and vowed that his province would encourage ticket sales through online and offline promotion as well as media events.

Even President Moon Jae-in recently posted a picture of himself buying a ticket on Facebook.

The government plans to buy tickets for unpopular events -- that cost 80,000 won ($70) or less per ticket -- to distribute at events. The Gangwon Provincial Government and its 18 counties have revised their initial purchase plan from 3,720 tickets to 27,834.