The film is a period piece that deals with a Chinese invasion which took place in 1636, prompting Joseon’s King Injo to take refuge in Namhansanseong, a mountain fortress located some 25 kilometers southeast of Seoul.

Within the fortress’ walls, Joseon officials desperately debated the course of action -- whether to surrender or fight despite the enormous gap in military power -- based on diverging philosophies on the meaning of honor, life and death.

The king’s chief advisers are actor Lee’s Choi Myung-gil, defending life and survival over lofty ideals, and Kim’s Kim Sang-hun, who staunchly believes that the only meaningful life is one with honor and dignity.

Director Hwang has tried his hand at many different genres. His “Miss Granny” (2014) a box office hit, which has spun several pan-Asian remakes, was a comedy. His film “Silenced” (2011) was a drama about school violence and human rights advocacy. 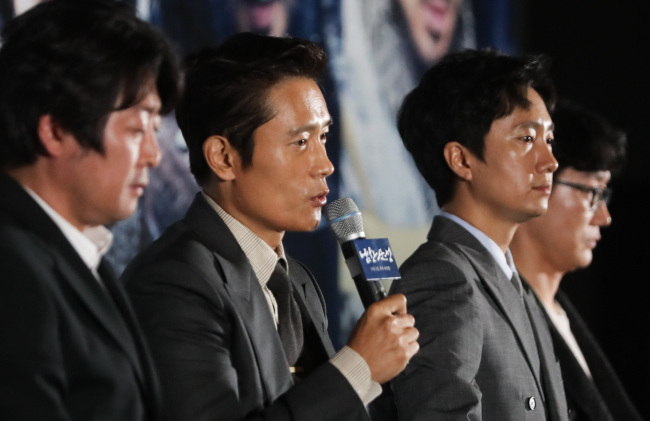 “This film, too, is a story of the cold and punishment,” said Hwang at a press conference for the film at CGV Yongsan in Seoul on Monday. “I was a longtime fan of (Sakamoto), but I had no idea how to contact him or if he would even agree (to work on this film) until I read an interview … and discovered that he was open to different projects. We then got in touch with him and after reading the synopsis, he happily agreed to work on the film.”

The film also stars Go Soo as a blacksmith and Park Hae-il as King Injo.

The movie, based on a novel of the same title by acclaimed Korean writer Kim Hoon, opens in theaters on Oct. 3.