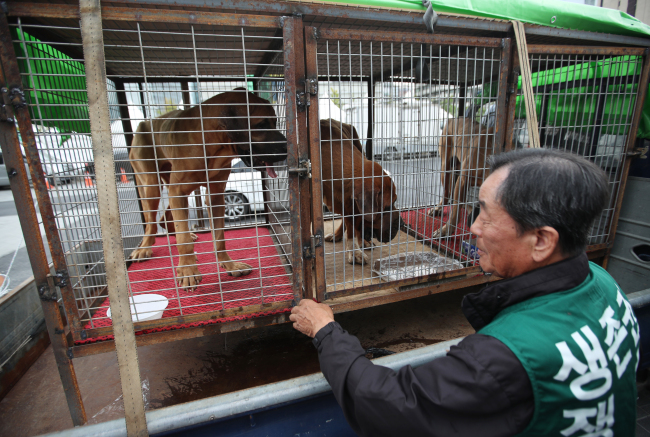 Unleashed dogs are inside cages during the dog meat farmers' protest in central Seoul, Friday. Yonhap
In one of the largest pro-dog meat rallies ever held in South Korea, an association of Korean dog meat farmers marched toward the presidential office Cheong Wa Dae, carrying nine live dogs in cages on three separate trucks, which had placards that read, “These are dogs for human consumption, not pets.”

Criticizing animal rights group for prioritizing animals over the farmers, they said it is unfair for the government to provide subsidies to animal shelters while not supporting their businesses.

“So many civic activists and animal rights groups have threatened to take away our rights to make a basic livelihood, in the name of animal rights,” said Kim Sang-young, president of an association for dog meat businesses.

Many farmers said they are seeing dramatic profit losses and feel threatened, as animal rights groups staged anti-dog meat campaigns against Boknal, which is when South Koreans eat high-nutrition dishes to prepare themselves for the sweltering summer days.

“We are here to defend the livelihood of some 1 million dog farmers,” a farmer surnamed Lee, who has been operating a dog meat business over 20 years in Dangjin, South Chungcheong Province, told The Korea Herald.

“Are dogs more important than humans? The country is treating us inferior to dogs,” he lamented.

The farmers also criticized animal rights proponents at the National Assembly, adding that they do not deserve to be the “voice of the people.”

“Lawmakers like Rep. Pyo Chang-won are causing chaos. He is persecuting innocent farmers,” a farmer who operates a farm with 300 dogs in South Jeolla Province told The Korea Herald.

Rep. Pyo, chairman of the Animal Welfare Committee at the National Assembly, recently put forth legislation to ban the consumption of dog meat. He was the first lawmaker to publicly announce his strong determination to introduce a ban on eating dog meat. 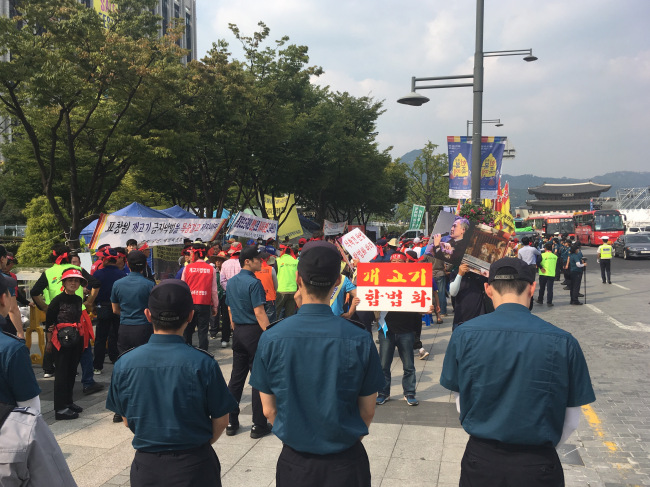 Dog meat farmers stage a protest in Gwanghwamun Square in central Seoul on Friday. Kim Da-sol/The Korea Herald
Meanwhile, members of animal rights group like Coexistence of Animal Rights on Earth countered the farmers’ rally with their own some 20 meters away, holding pickets expressing their opposition to eating dog meat.

“Dog meat has been left alone for nearly 40 years as an unsolvable problem, but the time has come to finally tackle it,” they said.

Some burst into tears upon seeing the live dogs in cages.

“Look inside the cage. There is no water bowl or food. Aren’t they supposed to put at least dog straps for the safety of the dogs? Isn’t that against animal welfare law?” members of animal rights group complained to officials from Jongno District Police who were also at the site.

The two rallies heated up as the association of dog meat farmers began marching toward the presidential office Cheong Wa Dae.

Chanting slogans like “legalize the dog meat trade,” the farmers demanded for the dog meat industry to be formally recognized like other livestock industries.

The industry has a history that dates back centuries, but it has struggled in recent years, with the popularity of “stamina-boosting” dog meat dishes on a marked decline and facing international criticism.

The Livestock Product Sanitary Control Act, which governs the slaughtering, processing, distribution and inspection of livestock products, does not categorize dogs as livestock to be processed as food.

President Moon Jae-in has pledged to enhance animal welfare, such as through the construction of more playgrounds for pets and feeding facilities for stray cats. Regarding the dog meat trade, he has stopped short of pledging an immediate and complete ban, saying it should be phased out.