In response to North Korea‘s missile launch Friday, South Korea fired off two ballistic missiles, but one of them crashed into the sea, sparking concern over Seoul’s missile capacity to counter the rogue regime.

According to South Korea’s Joint Chiefs of Staff, one Hyunmoo II-A intermediate-range ballistic missile splashed into the East Sea within a few seconds of being launched. The other flew 250 kilometers and hit its intended target accurately in a simulated pre-emptive strike.

South Korea’s military conducted the missile test almost simultaneously with that of North Korea. The North’s missile -- thought to be an intermediate-range Hwasong-12 -- blasted off at 6:57 a.m. from the vicinity of Sunan airport near Pyongyang.

“We’re trying to determine the exact cause of its failure,” said a Seoul military official who declined to reveal his identity due to the sensitivity of the issue. “We believe there was no damage to the area near the test site.” 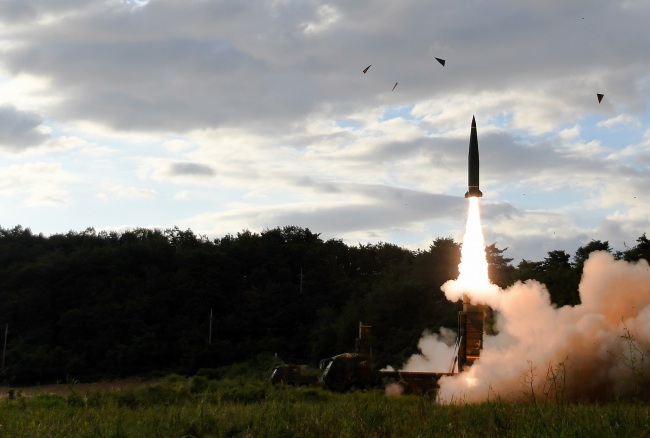 Capable of traveling 300 kilometers and carrying up to a 1.5-ton warhead, the Hyunmoo II-A missile has been billed as a key asset for the South Korean military to destroy North Korea’s underground nuclear sites, missile facilities and wartime commands.

Besides the Hyunmoo II-A, South Korea has similar Hyunmoo-class surface-to-surface missiles. Hyunmoo II-B can fly about 500 kilometers, carrying a 1-ton warhead and Hyunmoo II-C can travel about 800 kilometers, putting nearly all of North Korea within its range.

Earlier this month, South Korea and the United States agreed to scrap limits on the payload of South Korean ballistic missiles. Previously, Seoul was banned from fitting warheads weighing more than 500 kilograms on its ballistic missiles with a range of over 800 kilometers.

Faced with North Korea’s ever-evolving missile threat, South Korea has been scrambling to establish its own three-layered anti-missile system by the 2020s. The system consists of the Kill Chain system, the Korea Air Missile Defense system and Korea Massive Punishment and Retaliation plan.

Kill Chain is designed to detect signs of preparation for a missile launch and strike missile facilities before liftoff. KAMD involves shooting down the missiles midair and KMPR is to strike Pyongyang’s command posts in the event of nuclear attacks.