[ The Korea Herald – Send E-mail ]
Asia Pacific Cities Summit to open in Daejeon
By Yonhap
Published : Sep 6, 2017 - 10:02
Updated : Sep 6, 2017 - 10:02
DAEJEON -- Asia-Pacific mayors, scholars and business leaders will get together in the South Korean city of Daejeon next week to discuss solutions for urban innovation and sustainable development.

The 2017 Asia Pacific Cities Summit and Mayors' Forum will be held at the Daejeon Convention Center in the city, 164 kilometers south of Seoul, for a four-day run beginning Sunday.

More than 1,500 participants, including some 100 mayors, will attend the meeting co-hosted by Daejeon and Australia's Brisbane. 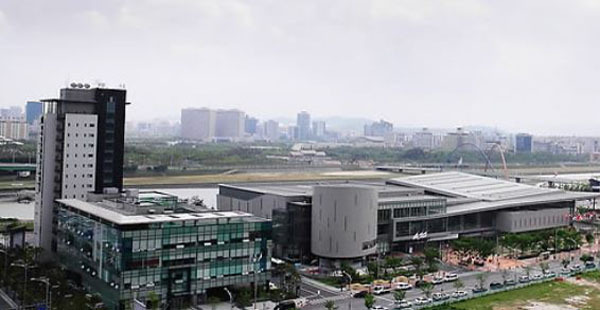 The Daejeon Convention Center in the namesake city, 164 km south of Seoul (Yonhap)
Under the title "Shaping the Future of the Asia Pacific," the meeting will handle four themes -- "Innovating Cities through Science and Technology," "Revitalizing Cities through Vibrant Business Activities," "Achieving Sustainable City Solutions" and "Recreating Cities through Art and Culture."

The gathering will feature speeches, lectures, forums and exhibitions.

Among the speakers are Cherie Blair, the wife of former British Prime Minister Tony Blair and founder of the Cherie Blair Foundation for Women; Jared Cohen, president of the international think tank Jigsaw; and Thomas Frey, a senior futurist at the DaVinci Institute.

A joint declaration on urban innovation strategies will be adopted at the Mayors' Forum.

Some 120 Asia-Pacific companies will display their products at a business exhibition.