The head of South Korea's central bank on Monday lashed out at recent comments by a presidential aide that the low key rate is problematic.

Officials "should be careful in making comments that could affect the financial markets," Bank of Korea Gov. Lee Ju-yeol said in a parliamentary session. 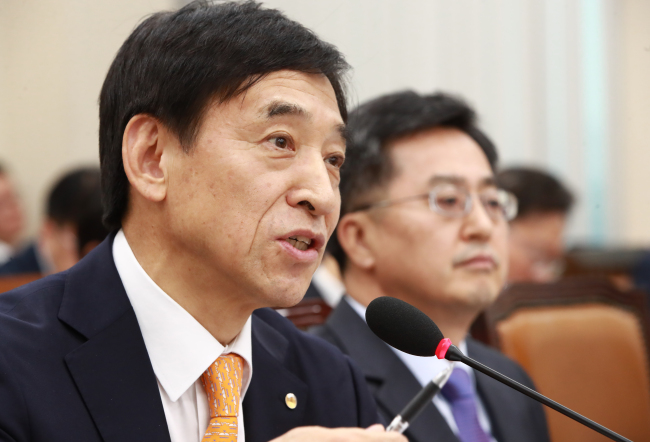 Bank of Korea Gov. Lee Ju-yeol (left) speaks at a parliamentary session on Monday. (Yonhap)
It marked the second time this month that Lee has made a thinly veiled criticism against the presidential economic aide, who said in a recent interview with a newspaper that the low key rate is to blame for rising household debt and real estate speculation.

Lee also told lawmakers that the presidential economic aide's comments undermined the confidence on the BOK's Monetary Policy Board, which decides the key rate.

Asked whether the government had requested that Lee raise the key rate at the rate-review session set for Thursday, Lee said no.

Lee met with Finance Minister Kim Dong-yeon on Aug. 16 and the two shared the view that the monetary policy is an issue that should be decided independently by the BOK's Monetary Policy Board.

Moody's Analytics, a leading provider of economic analysis, said it expects the BOK to hold its key rates steady this month as soft economic growth alongside subdued inflation will keep the central bank on the sidelines through the remainder of 2017.

In July, the BOK kept its policy rate at an all-time low of 1.25 percent, though it said that it may take a monetary tightening approach if the economy shows signs of a robust recovery, a comment widely seen as signaling a rate hike by the central bank over the long haul.

South Korea's overall household debt came to 1,388.3 trillion won ($1.22 trillion) as of end-June, up 10.4 percent from a year earlier, according to data compiled by the BOK. (Yonhap)