The predictions come as the Bank of Korea is set to convene a Monetary Policy Committee this week to deliberate the country's key rates.

Initially, there was speculation that some members of the committee will express views of marking up rates in the future to reflect improvements in the overall economy fueled by strong exports and improving consumer sentiment.

In the second quarter of this year, Asia's fourth-largest economy grew 0.6 percent compared to the previous three month period with surge in outbound shipments of semiconductors and other manufactured goods stimulating domestic consumption. In the April-June period consumption advanced 0.9 percent vis-a-vis the first three months of this year, the highest reading in six quarters. 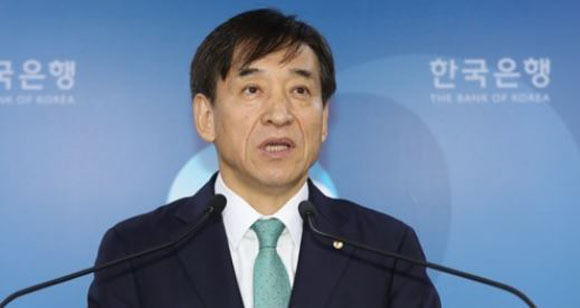 Bank of Korea Gov. Lee Ju-yeol (Yonhap)
BOK Governor Lee Ju-yeol also said in the July MPC meeting that there is a need to adjust the current monetary easing policy if the economy continues to make solid gains.

In that meeting, the monetary policy board unanimously voted to keep the key rate at the record low 1.25 percent mark, extending its wait-and-see approach for the 13th consecutive month.

The central bank said the country's growth will reach a respectable 2.8 percent this year, with Seoul being "pressured" to mark up its rate as the United States is taking steps to move forward with its monetary easing policy stance.

Such positive views took a hit after the North Korean risk took center stage, with bellicose rhetoric being exchanged between Washington and Pyongyang. The former, while emphasizing the need for diplomacy started to float the possibility of preemptive strikes against the reclusive regime.

Such developments caused the composite consumer sentiment index to backtrack after seven straight months of gains with the export volume index edging up just 0.1 percent in July.

In addition the drop in Chinese tourists who accounted for half of all foreign visitors have hurt local businesses.

Reflecting this most market experts said that there is less chance of MPC members even mentioning rate hikes at this juncture.

"The committee will thoroughly examining whether recent gains in export are positively affecting domestic consumption and what comes out of the government's real estate and household debt reduction policy," said Park Hee-chan, a researcher at Mirae Asset Securities.

This view was echoed by Lee Keun-tae, a researcher at the LG Economic Research Institute who stressed that the North Korea risk added a new dimension.

He said that there is no guarantee that global growth in the second quarter will be copied in the third quarter.

"The BOK will likely freeze rates in light of the latest developments," he said.

A BOK insider, meanwhile, said that moves in the US and Europe to adjust rates to reflect growth are being examined carefully, especially to deal with rise in household debt. He said at the same time as these developments are being checked, policymakers here will keep close tabs on economic growth that will play a key role in the rate setting process. (Yonhap)