It said Ryder plans to deliver a keynote speech at the forum on job-creation strategy and labor policy to be hosted by the Seoul Metropolitan Government on Sept. 5-6. 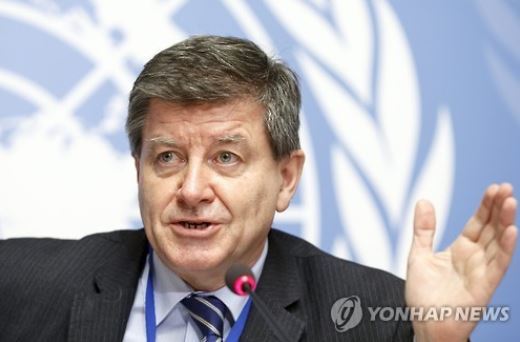 This photo released by Europe`s news photo agency EPA on Jan. 19, 2016, shows Guy Ryder, Director-General of the International Labour Organization (ILO). (Yonhap)
The forum will bring together officials from 10 cities including New York and London and representatives from eight international organizations, it said.

Ryder took office in 2012 as the ILO's chief for a five-year term and was re-elected to head the UN agency until 2022.

The four-session forum will deal with city governments' role in boosting jobs and labor policy.

On the second and last day of the meeting, participants are expected to unveil the so-called Seoul Declaration which outlines tasks needed to make a city which provides good jobs, it said. (Yonhap)