The FSS is expected to announce successful applicants for IB and short-term financing sometime in October.

Issuing notes payable up to 200 percent of capital is a key feature of an investment bank, allowing securities firms to use the funds for corporate financing, according to the officials. 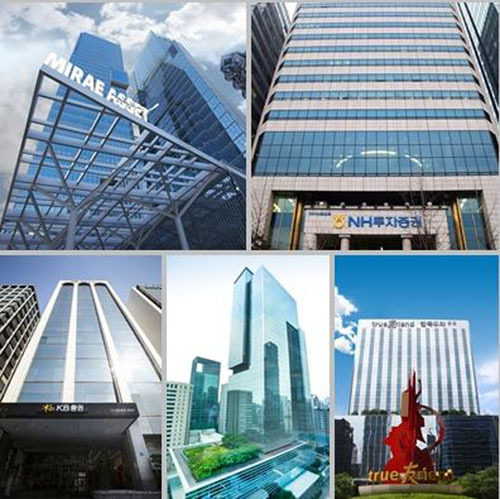 (Yonhap)
Mirae Asset Daewoo, the biggest of the five in terms of capital with 7.15 trillion won as of end-June, will be the first to be reviewed. The firm has newly launched a comprehensive asset management team with boosted manpower and developed an electronic system for promissory note transactions.

NH Investment & Securities has been preparing for IB business from 2014. A task force launched on Jan. 1 this year in preparation for FSS inspections was switched strategic asset management division in early June to handle short-term financing and issuance of promissory notes.

KB Securities, who has become the third-largest in the industry after a merger with Hyundai Securities, has also been operating a preparatory team for IB business. It has been concentrating on setting internal standards on operating venture capital, company officials said.

Samsung Securities, to be inspected on Thursday, will be excluded in review for short-term financing business due to court proceedings under way for Lee Jae-yong, vice chairman of Samsung Electronics.

Lee, the heir-apparent of Samsung Group, was sentenced five years in prison on Friday on bribery, embezzlement and other charges. His lawyers said they will appeal.

FSS officials said they have notified Samsung Securities that the regulator will suspend its inspections for approval of short-term financing until after the final court ruling is made.

Korea Investment & Securities opened a comprehensive financial investment department in June that has been studying investment models that had positive results. (Yonhap)