The employment rate of South Korean women in their 30s hit a record high in the first half of this year, data showed Saturday, as the government has taken a series of measures to bring stay-at-home moms back to work.

Statistics Korea said the employment rate of women in their 30s stood at 59.2 percent, the highest half-year figure since 1999 when the statistics office began compiling relevant data. 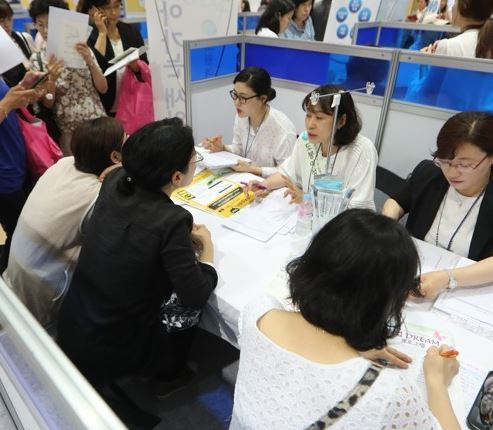 (Yonhap)
The employment rate of women in their 30s has been on the rise in recent years as women delay marriage, and the government has taken a series of steps to ensure that female workers do not suspend their careers.

Still, many South Korean women complain that their careers can suffer as it is not easy for them to find jobs after spending an extended time away from work to raise children.

About half of South Korean women at work quit their jobs in 2016 due mainly to marriage, pregnancy and childbirth, according to the government. South Korea's female labor participation is among the lowest in the world, as many women with children leave work to take care of their families. (Yonhap)