The amount of crowdfunding in South Korea shot up nearly 29 percent this year, data showed Friday, showing the platform growing as an effective financing option for startups.

According to the data by the Korea Securities Depository, 106 companies raised a combined 14.2 billion won ($12.6 million) from 5,826 investors between February and August, up 29.1 percent from the same period a year earlier.

The number of the firms involved represented a whopping 51.4 percent increase from the 70 a year earlier. 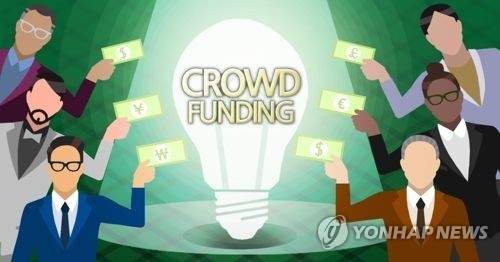 South Korea, a global tech powerhouse, adopted the equity-style crowdfunding program in January last year, which enables startups and smaller firms to raise capital from a large number of small investors, typically via the Internet and social media.

Companies in the publishing, filmmaking, broadcasting, and communications and information service sectors secured the largest amount of 6.4 billion won through crowdfunding during the cited period.

Manufacturing firms came next with 4.4 billion won, followed by wholesalers and retailers with 1.8 billion won.

Younger companies raised more funds, with firms with a history of less than one year securing the biggest sum of 4.7 billion won during the period, according to the data. (Yonhap)