Similar to the original statue situated in front of the Japanese Embassy in Seoul, the lightweight effigy represents the euphemistically labeled “comfort women” -- women mostly from South Korea and China who were forced into sex slavery for Japanese soldiers during World War II. 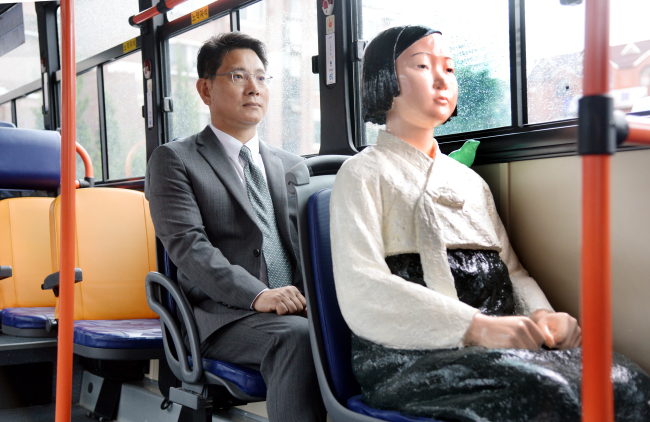 Donga Traffic Service CEO Rim Jin-wook appears behind a statue of a girl installed on one of his company’s commuter buses in Seoul. (Park Hyun-koo/The Korea Herald)
Their bus ride, unveiled on the eve of the Aug. 15 Liberation Day, which marks Korea’s independence from Japanese colonial rule, has been the talk of the town in Seoul. Seoul Mayor Park Won-soon, accompanied by a group of journalists, rode one of the buses on Aug. 14 to pay tribute to the victims. Commuters have shared photos of the statues they encounter on the buses via social media.

Behind this much-publicized event, which has also grabbed the attention of Japanese media and politicians, is Rim Jin-wook, owner of Donga Traffic Service.

It was Rim who first came up with the idea and he who pushed for it, assuming the entire cost by himself. 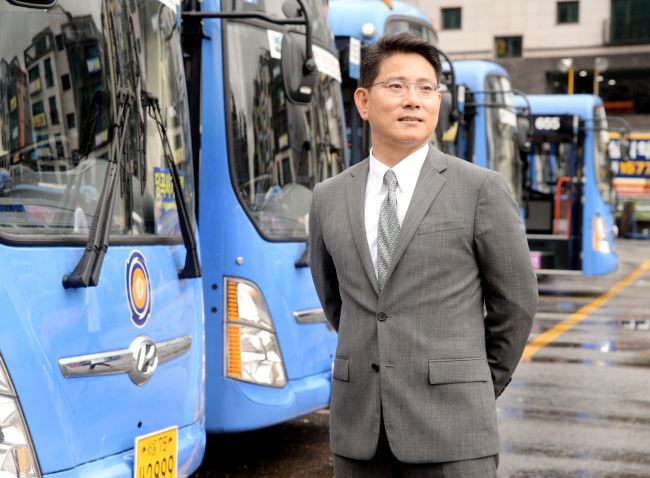 (Park Hyun-koo/The Korea Herald)
“Some may call me nationalist or political, but I’m doing what I can do as a citizen,” Rim said at the firm’s garage in Ui-dong, northern Seoul. “Only 37 of the victims are still alive (in South Korea). They will die sooner or later.”

Rim wanted to remind passengers of the plight of comfort women and protest against the 2015 deal between the Seoul and Tokyo governments to “finally and irreversibly” settle the issue, which did not consider victims’ opinions.

“The deal was made without any consent of the victims, which was just outrageous and unacceptable. I’m not a politician or in any position to protest the deal alone, but as a head of a bus company, I wanted to fight it in my own way.” Rim said.

Under the deal, Japan offered 1 billion yen ($9.1 million) in compensation, though without acknowledging legal responsibility. The money was channeled via a South Korean fund to some former comfort women and their families. 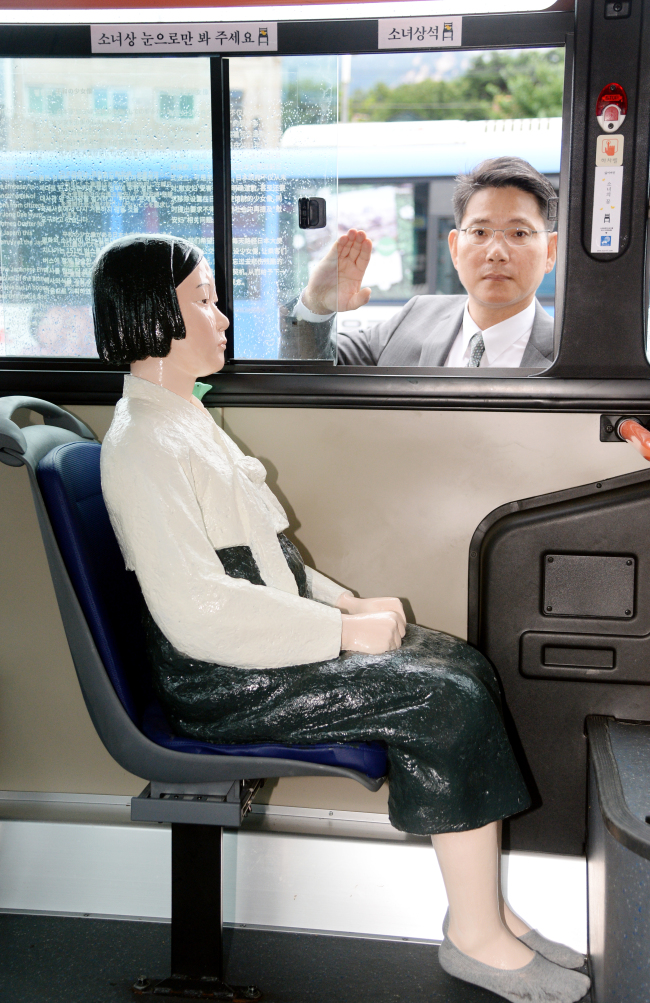 (Park Hyun-koo/The Korea Herald)
The statues were created by artist Kim Eun-sung and his wife, who made the original in front of the Japanese Embassy. Rim met Kim at an alumni event in 2014.

“I went to the same college with the artist, although we did not know each other back then. I called the couple earlier this June to see if they were interested in designing a set of lightweight copies to be installed on my buses and they said OK,” Rim explained.

Pictures of the statues riding the buses have been carried by almost every major newspaper in South Korea. Those taken by passengers have gone viral through social media, successfully rekindling the public’s interest in the unresolved wartime atrocity.

Some have paid tribute to the statues by placing floral wreaths at their knees. Others put socks on their bare feet.

Not surprisingly, Rim’s actions have irked Japan, which has reacted sensitively whenever a new comfort women statue is erected.

One day after their unveiling, Japan’s Chief Cabinet Secretary Yoshihide Suga publicly expressed concerns over the operation of the buses carrying statues, according to Japanese daily Yomiuri Shimbun.

“Japan and South Korea are making efforts to develop a future-oriented relationship,” Suga told a press conference, adding that setting up the statues “may put a damper on the efforts,” the news outlet reported.

Affected bus routes include some spots favored by Japanese tourists, such as Namdaemun Market and Lotte Department Store in Myeong-dong.

But that doesn’t seem to bother Rim at all.

“Just think about how absurd it is when a political heavyweight such as a chief cabinet secretary himself reacts extremely sensitively to a mere owner of a local bus company like myself. If they feel uncomfortable about it, I think they should feel the same way to the horrific plight of our victims,” Rim opined.

“The statues will be on the bus until the end of September as scheduled,” he said.