[ The Korea Herald – Send E-mail ]
Moon to hold summit with Putin in Vladivostok next month
By Yonhap
Published : Aug 22, 2017 - 13:23
Updated : Aug 22, 2017 - 14:25
South Korean President Moon Jae-in will hold a summit with his Russian counterpart Vladimir Putin in Vladivostok next month during a trip to take part in the Eastern Economic Forum, the presidential office Cheong Wa Dae said Tuesday.

The forum, to be held Sept. 6-7, will largely focus on the economic and development potentials of Russia's Far East, and possible a chance for South Korean businesses to explore new business opportunities there.

However, the venue is also expected to provide a crucial opportunity for the new South Korean leader to discuss regional efforts to rein in North Korea's evolving nuclear and missile capabilities, according to Cheong Wa Dae. 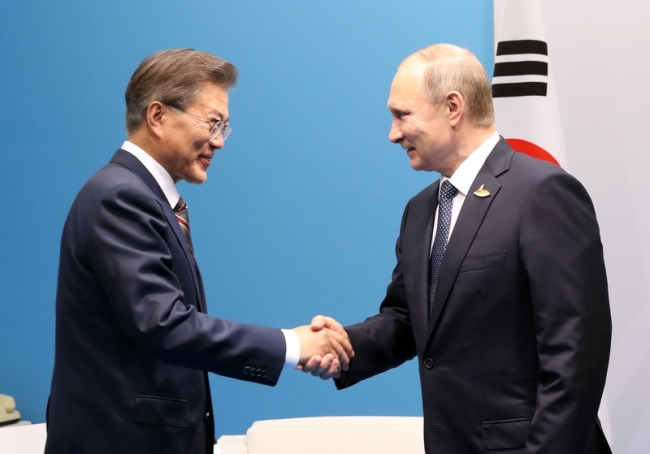 Still, Moscow, along with the North's communist ally Beijing, are seen reluctant to put what Seoul and its US ally call maximum pressure and sanctions on the North.

The Moon-Putin meeting will be the second of its kind since the South Korean president took office on May 10. The two held bilateral talks on the sidelines of the Group of 20 summit held in Hamburg, Germany last month.

Following his trip to Russia, the South Korean president will head to New York in mid-September to attend the UN General Assembly.

He will give a keynote speech at the annual meeting of the world body, according to Park.

In November, the South Korean president will take part in the Asia-Pacific Economic Cooperation summit to be held in Vietnam on Nov. 10-11. He will then fly to the Philippines for the annual summit of the Association of Southeast Asian Nations Plus Three that will also involve the leaders of China and Japan. (Yonhap)