[ The Korea Herald – Send E-mail ]
‘Singapore, Korea pacesetters in low-growth era’
By Joel Lee
Published : Aug 21, 2017 - 18:37
Updated : Aug 21, 2017 - 21:18
As a small city-state at the foot of peninsular Malaysia, Singapore has blazed a trail through the rough currents of international politics and business over the 52 years since its independence, which it marked on its National Day on Aug. 9.

Dubbed the “Lion City,” “Garden City” or “Little Red Dot,” the cosmopolitan metropolis of 5.6 million people has a gross domestic product of $311 billion, or $55,000 per capita, making it the richest Asian country.

As the Association of Southeast Asian Nations celebrates its 50th anniversary this year, Singapore’s path of nationhood, self-preservation, global engagement, development and welfare can be a source of future-oriented cooperation with Korea in an age of slowing growth, according to Singaporean Ambassador Yip Wei Kiat.

Ranging from tackling a low birthrate and declining population to health care, lifelong learning, automation, innovation and sustainable urban planning, Singapore and Korea can join hands to skillfully navigate the capricious, unpredictable global economy in the unforeseeable future, he said in an interview with The Korea Herald at the Singaporean Embassy in Seoul last week.

The following is the first of a two-part interview with the envoy, excerpted for convenience. 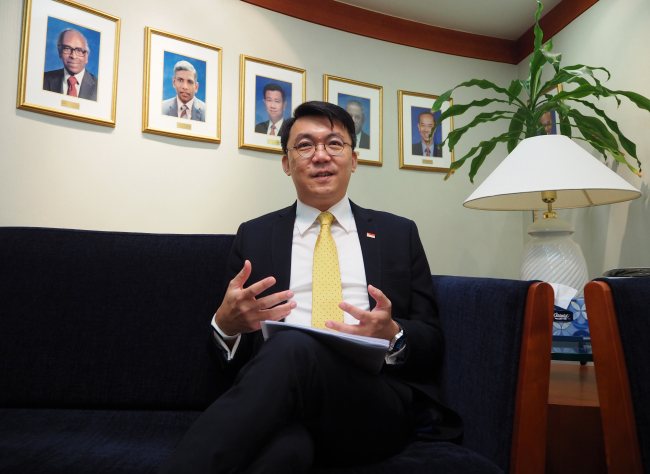 Singaporean Ambassador Yip Wei Kiat (Joel Lee/The Korea Herald)
The Korea Herald: What does this year mean for Singapore and its foreign affairs, as the city-state was one of the founding members of ASEAN, which is celebrating the 50th anniversary of its existence? How can Korea and Singapore cooperate more through ASEAN?

Yip Wei Kiat: This year is very important for Singapore’s foreign affairs, as we have relied on ASEAN in a myriad of important ways and will take over the ASEAN chairmanship next year. ASEAN is a critical platform for not only Southeast Asian countries to interact and overcome their differences, but also to engage our dialogue partners around the world, such as Korea, Japan, China, America and Australia.

We say that ASEAN is a convener for regional countries to come together and work with us, as well as for our partners to collaborate. As an example, we have meetings with dialogue partners at the ASEAN Foreign Ministers’ Meeting, which has also helped trilateral cooperation processes between China, Korea and Japan.

When we launched the ASEAN Community, particularly the ASEAN Economic Community, on Jan. 1, 2015, it has provided a good opportunity for our dialogue partners to tap into ASEAN’s integration. They can work with us and get involved in our process of integration and connectivity to create more values for themselves. 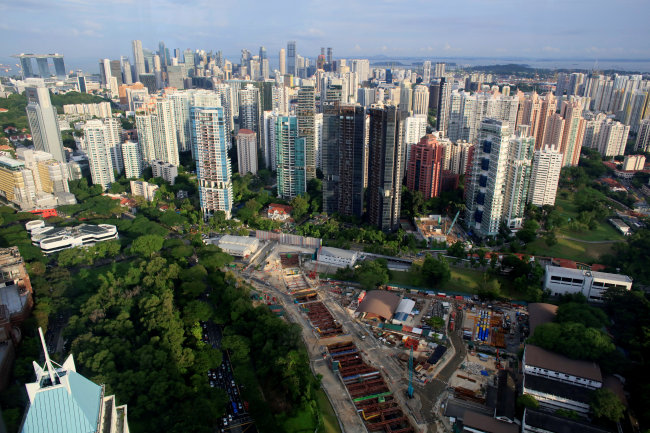 The skyline of Singapore (Yonhap) 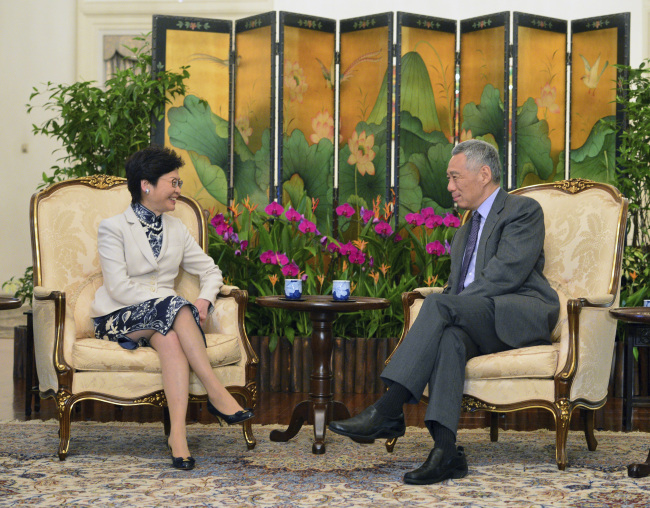 Hong Kong Chief Executive Carrie Lam (left) chats with Singapore Prime Minister Lee Hsien Loong during a call at the Istana presidential palace on Thursday, Aug. 3, 2017 in Singapore. (Roslan Rahman/Pool Photo via AP)
KH: Can you elaborate on ASEAN’s institutional characteristics compared to the European Union and the governing principle of unity in diversity?

We have gone a long way in forging our relations beyond how they were in their inception. There are of course differences and disagreements in our views, but we cannot fathom an open conflict among us today.

Although ASEAN comprises of 10 countries compared to EU’s 28 member states, the scope of our diversity and differences is far wider than the EU’s culturally, linguistically and politically, ranging from democracy to absolute monarchy as well as the socialist system.

Our populations are also very different, from 420,000-strong Brunei to Indonesia with 264 million people. Due to our wide-ranging differences, we don’t talk about having a common foreign policy or social policy. Instead we try to harmonize ourselves, particularly economically within an integrated market. We don’t have a common currency like the euro.

But there are also areas where we form a common voice, for example regarding the North Korean nuclear issue, or territorial disputes in the South China Sea, where we are working toward a code of conduct. Apart from the ASEAN Foreign Ministers’ Meeting, there are many sectorial ministerial meetings covering the defense, economy and environment, et cetera, where we try to find common ground for cooperation. 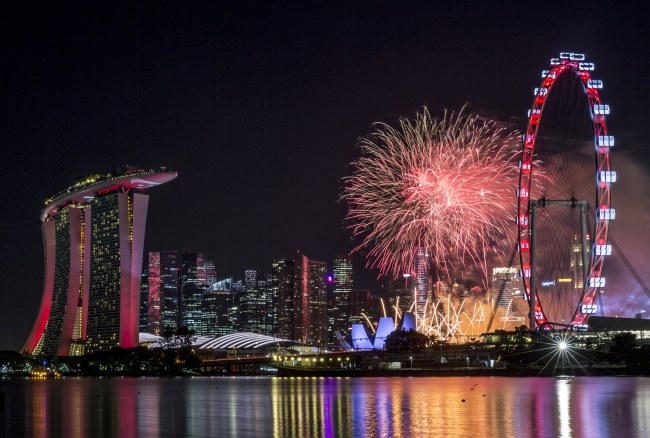 Fireworks explode over the Marina Bay to mark the end of the National Day Parade in Singapore, 09 August 2017. Singapore celebrates its National Day annually on 09 August to commemorate its separation from the Federation of Malaysia in 1965. (EPA/WALLACE WOON) 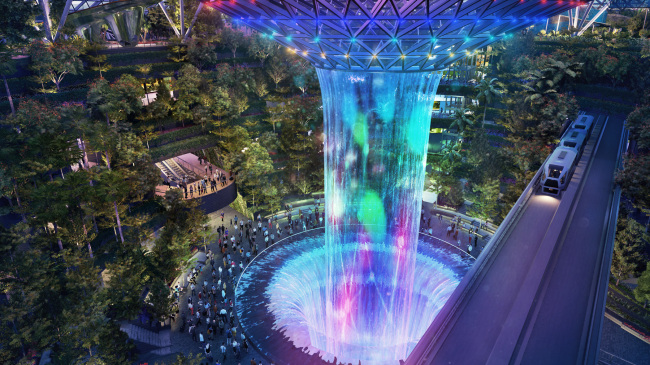 Yip: As our many statements regarding North Korea verify, we take the latest developments very seriously. This is not a localized problem in Northeast Asia anymore. Whatever happens in and around the Korean peninsula has big impacts on Southeast Asia as well.

As Pyongyang’s nuclear capabilities advance fast, the nukes will be able to reach any part of the world, including Southeast Asia. The issue has become the elephant in the room in our region’s foreign policy preoccupations. It is politically consequential too, as not simply a matter of the Korean Peninsula’s stability, but of regional hegemonic rivalry between the US and China, with significant implications for us as well.

We don’t think the North’s pursuit of nuclear weapons will safeguard its development or welfare in the long run. Essentially, you cannot avoid a return to dialogue at some point to resolve the issues and tensions permanently. I want to highlight that apart from the United Nations, the ASEAN Regional Forum is the only multilateral mechanism where North Korea participates.

We have supported and implemented all United Nations Security Council resolutions in a timely manner, and Singapore has gone even beyond what the UNSC has asked us to do, for example, reimposing visas for North Korean passport holders since October last year. 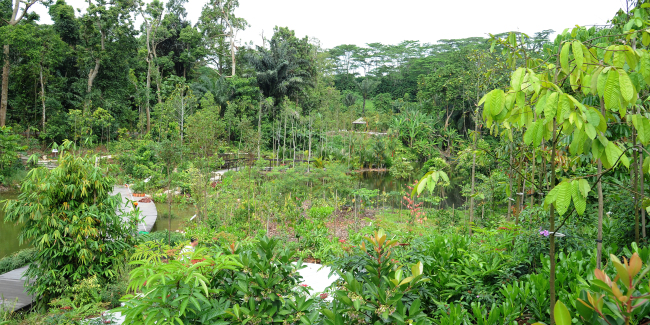 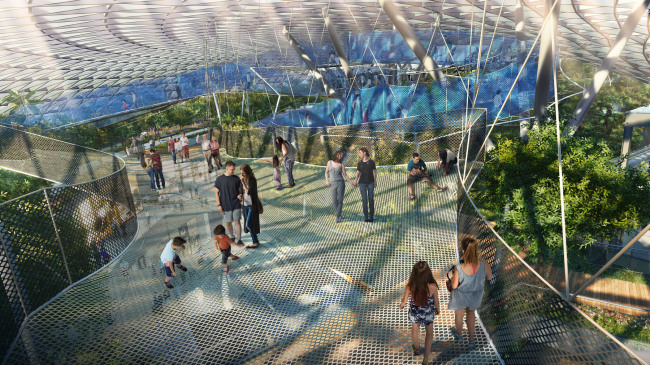 Sky Nets in Singapore (Jewel Changi Airport Development)
KH: This year also marks the 10th anniversary of the ASEAN-Korea free trade agreement. How has the FTA benefitted both sides and what needs to improve to ensure greater trade and investment, liberalization and enhancement of services?

Yip: There has been a marked increase in bilateral trade between ASEAN and Korea since the FTA took effect in 2007. It has more than doubled (reaching $123 billion in 2015). Trade has increased significantly for every single ASEAN member state, which is a very positive news.

The ASEAN-Korea FTA doesn’t exist in a vacuum by itself. It is part of efforts at larger regional groupings like the Regional Comprehensive Economic Partnership agreement (a proposed free trade agreement between 10 member states of ASEAN and the six states with which ASEAN has existing free trade agreements: Australia, China, India, Japan, South Korea and New Zealand). So we have to vigilantly watch larger economic trends around the world and make adjustments to make ours as progressive and liberal as possible.

An FTA is not a static one-off arrangement, and has a built-in mechanism for regular reviews to make sure the agreement maintains competitiveness and is consistent with changing economic trends around the world. FTAs have room for improvement. Not everything takes effect immediately, with tariff reductions phased over time.

There is good harmonization between the ASEAN-Korea FTA and what we are doing through the ASEAN Economic Community. So Korean companies can take advantage of the integration process in Southeast Asia through the FTA.

Some ASEAN countries have bilateral FTAs with Korea, including Singapore since 2006, as well as Vietnam. As Singapore and Korea have overlapping deals, companies can look into both and see where they can get the better benefits and incentives.

As a small trading nation, we have always believed that having bilateral FTAs with other economies is important, regardless of whether we are part of a multilateral accord or not. It is because whereas we don’t have problems opening up our sectors, certain countries in ASEAN have not liberalized their sensitive sectors to their full potential, thus lowering the bar for everyone.

If we want to move faster in certain areas, we can do so through a bilateral FTA and not be held back by other countries. Generally speaking, bilateral FTAs tend to be more liberal than regional ones.

The issue is no longer simply about tariffs and trade, but about increasing investment and creating a better environment and terms for it. It’s also about harmonizing the processes and standards of trade and investment. For example, if a product has been certified for safety in Korea, it doesn’t have to be tested again in Singapore. 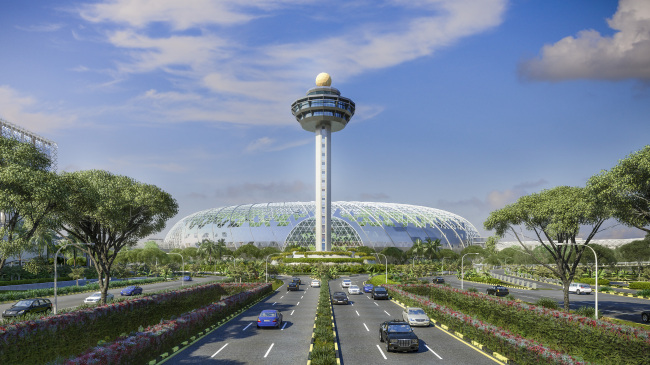 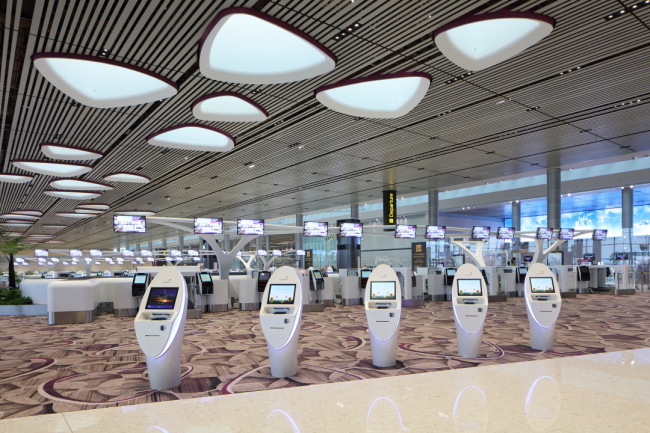 FAST technology at Terminal 4 (Changi Airport Group)
KH: Can you highlight structural reforms your government has undertaken in recent times to upgrade the economy’s competitiveness and innovative capacity?

Yip: Faced with an aging population and low birthrate, we have focused our attention on raising economic productivity through various reforms in recent years, just as Korea has. But in our case, reforms have been more urgent due to our economy’s maturity, small population size, shrinking labor force and limited land area.

Countries like Singapore cannot grow their pies simply by putting more of the same ingredients into their development formulas. Therefore we have looked at various other ways to sustain our growth and raise the value of input. It is about value addition by working with our partners for innovation, creative ways of thinking and new processes.

The new buzzword in Singapore is creative disruptions to the business-as-usual modes of operation. Industry 4.0 -- comprising digital economy, electronic commerce, financial technology and the online transport network, among others -- is one aspect of it. It has big impacts because our traditional brick and mortar stores are suffering as people resort to online commerce to buy things. This has presented new challenges for retailers to come up with ways to respond.

Online platforms like Uber, as well as our homegrown private transport service, are creating total upheavals for Singapore’s taxi industry. It brings tremendous benefits to customers, but is detrimental to taxi drivers. So one thing we have done is create new ways for taxi drivers to be part of e-commerce, delivering goods, essentially being a courier service.

We have also incorporated automation and digital technologies into our businesses to raise productivity. The fourth terminal of Singapore Changi Airport will open as a completely automated facility with check-in and other processes all self-serviced. This way we have turned our disadvantage of short manpower into an advantage that can be exported worldwide.