Calls for nuclear armament have gained traction as Pyongyang stepped up its nuclear and missile programs, with two nuclear tests last year, as well as a series of missile launches, including those capable of reaching the continental US.

Reflecting such calls, the main opposition Liberty Korea Party adopted a demand Wednesday for the redeployment of US tactical nuclear arms as its official party line during a general meeting of its lawmakers.

"If we say we're going to have nuclear weapons while putting forward the goal of North Korea's denuclearization, it will end up undermining the justification of our demand for denuclearization and further accelerating nuclear armament in Northeast Asia," Lee said in an interview with YTN television. 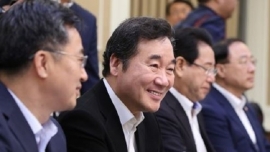 "It will also mean that we have to be prepared for international economic sanctions. This is not an issue that we can make a hasty decision on," he said.

But Lee then said the country should consider introducing nuclear-powered submarines to cope with growing threats from the North.

Lee also said that South Korea and the US are on the same page on the North Korea problem, rejecting concerns about so-called "Korea passing" -- the belief that South Korea might be sidelined by the US and other key players in efforts to resolve the crisis.

"It's true that the situation is very grave. This is a situation that was unimaginable in the past," he said. "It won't be easy for Chairman Kim Jong-un to go ahead and play with fire if he's eager to keep the existence of the system he leads. The US can prepare military options, but it won't be an easy decision to put them into action."

In response, US President Donald Trump has openly talked about military options.

On the issue of pesticide-contaminated eggs, Lee expressed confidence that the government will bring the situation under control quickly, saying how it handles the case will determine whether or not the current administration is competent.

"Just as we resolved the avian influenza issue quickly, I'm sure the situation will go back to normal within a few days too," he said.