South Korea's finance chief said Wednesday that the government is keeping close tabs on the local financial market following the latest North Korean provocations, but predicted only a limited impact.

"We are watching the market around-the-clock, but its impact seems to be limited," Finance Minister Kim Dong-yeon said in a meeting with economy-related ministers in central Seoul. "We are mapping out plans for various scenarios." 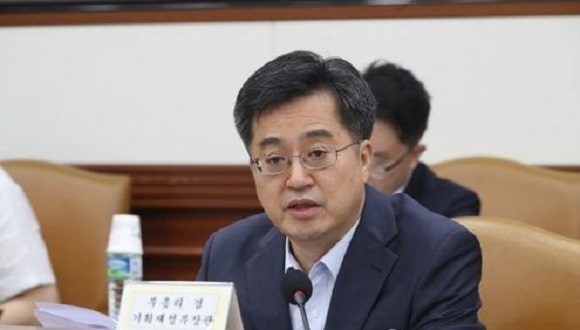 (Yonhap)
Geopolitical risks over North Korea's missile and nuclear programs heightened on the Korean Peninsula and in Northeast Asia.

Last month, North Korea fired a second intercontinental ballistic missile in less than a month, further escalating tensions among powers including the United States and China.

But the South Korean stock and foreign exchange markets seemed to be hardly affected last week. The benchmark KOSPI lost 0.23 percent from a week earlier despite Donald Trump's signing of new sanctions on North Korea. The Korean won fell 3 won against the US dollar over the one-week period.

Ahead of the 2018 budget proposal, which is to be submitted to parliament by Sept. 2, the finance minister said the government is pushing to set aside more money for welfare and job creation in next year's budget while slashing infrastructure-related investment.

Job creation is one of the top priorities by new President Moon Jae-in.

Kim also said that the government will keep a close watch on the real estate market and vowed to root out real estate speculation by taking additional steps, if necessary.

Last week, the government designated all 25 districts in Seoul and two other cities as "overheated speculative districts" in a move to stabilize the country's overheating housing market.

The government has also adopted stricter rules, which require multiple-home owners to pay higher capital gains taxes when they sell their houses. The owners of two houses or more already pay a substantial sum when they sell their homes. Under the new rules, they are obliged to pay up to 20 percent additional taxes on top of existing dues.

As for lending rules, the government has reduced the loan-to-value and debt-to-income ratios to 40 percent for home purchases in all the designated speculative and overheating speculative districts.

Kim said the government will unveil comprehensive measures later this month on how to tackle rising household debt.

As of end-March, South Korea's overall household debt came to a record high of 1,360 trillion won, up 11.1 percent from 1,224 trillion won a year earlier. (Yonhap)