That date, which falls on Thursday, is the anniversary of the signing of the Armistice Agreement that ended the conflict.

"On National Korean War Veterans Armistice Day, we honor the patriots who defended the Korean Peninsula against the spread of communism in what became the first major conflict of the Cold War," Trump said in a statement released by his office.

"We remember those who laid down their lives in defense of liberty, in a land far from home, and we vow to preserve their legacy." 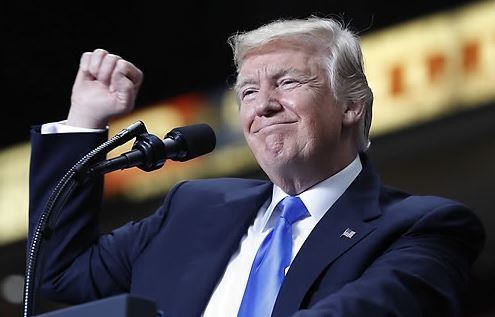 US President Donald Trump (AP/Yonhap)
More than 36,000 Americans were killed in the war that pitted United Nations-allied forces against an invading North Korea, backed by the Soviet Union.

Trump noted that while the armistice stopped all hostilities, it did not bring peace to the peninsula.

"North Korea's ballistic and nuclear weapons programs continue to pose grave threats to the United States, and our allies and partners," he said. " At this moment, more than 28,000 American troops maintain a strong allied presence along the 38th parallel, which separates North and South Korea. These troops, and the rest of our Armed Forces, help me fulfill my unwavering commitment as president to protecting Americans at home and to steadfastly defending our allies abroad."

The president vowed never to forget the veterans and called on all Americans to observe the day with "appropriate ceremonies and activities that honor and give thanks" to them.

The two Koreas remain technically at war as the armistice was never replaced with a peace treaty. (Yonhap)