Another South Korean woman who was forced into sexual slavery by Japan during its occupation of Korea in the first half of the 20th century died Sunday, a local civic group said, bringing the number of known living South Korean victims of the sex slavery to 37.

According to the House of Sharing, Kim Gun-ja died aged 91 at the shelter for living “comfort women,” a euphemistic term for sex slaves forced to work in Japan’s military brothels, south of Seoul, at 7:51 a.m.

Born in Pyeongchang, Gangwon Province, Kim was forcibly sent to a wartime brothel in China, then under Japanese control, to work as a sex slave at 17. She had attempted to take her own life on seven occasions while serving as a sex slave for three years.

After Korea was freed from Japanese colonial rule in 1945, she returned home, briefly lived with a man she promised to marry before being sent to the military brothel and lived the rest of her life alone.

The last words she made in public came when newly named Gender, Equality and Family Minister Chung Hyun-back visited her at the shelter on July 10. 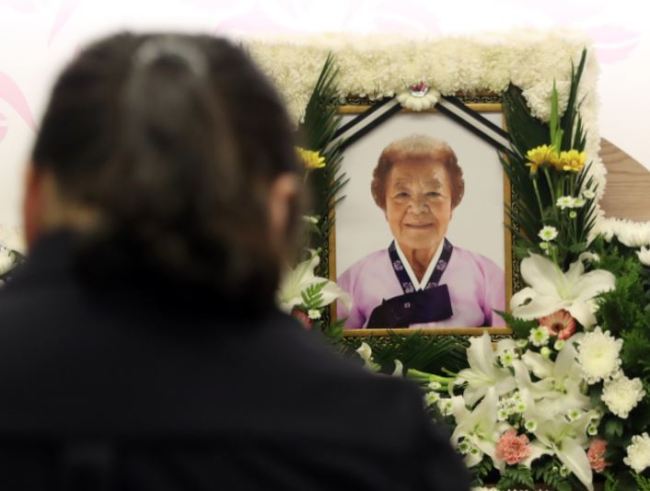 Kim Gun-ja died at the age of 91 at a shelter south of Seoul, Sunday. (Yonhap)
“My honor was not restored 70 years after the nation’s liberation (from Japanese rule),” she said.

Kim was at the forefront of efforts to reveal Japan’s wartime atrocities.

“I was beaten almost to death and I had to serve 40 men every day. I returned to my country after walking for 38 days,” Kim testified of the horrors of being a comfort woman during a hearing hosted by then-US Rep. Mike Honda in February 2007. Following her testimony, the US Congress passed a resolution urging Japan to admit its wrongdoings and apologize to the victims.

There were originally 238 victims of sex slavery by Japanese soldiers registered with the government. Only 37 are still alive, all of whom are aged over 85. This year alone, three victims died.

Gender Minister Chung and Foreign Minister Kang Kyung-hwa visited the deceased’s mortuary in the evening to offer their condolences.

“The Ministry of Gender, Equality and Family will push for projects to restore the honor and dignity of the victims and do its best to stabilize their livelihoods for them to spend the rest of their life at ease,” Chung said in a statement.

Japan’s sexual enslavement of Korean women has remained one of the key sources of diplomatic dispute between South Korea and Japan.

According to historians, up to 200,000 women, mostly from Korea, are estimated to have worked as comfort women at Japan‘s front-line brothels during World War II. Japan colonized Korea from 1910-45.

The countries reached a historic deal defined as “final and irreversible” in late 2015 in which Japan offered funds and an apology to the surviving victims in return for Seoul’s promise not to raise the issue again in international forums.

But some of the comfort women and their rights groups have protested the deal, calling for a sincere apology and legal compensation from the Japanese government. Kim was one of them.