Dual-camera phones refer to smartphones that have two cameras on the rear, capturing more information and making both the subject and background clearer compared to a single-camera phone. 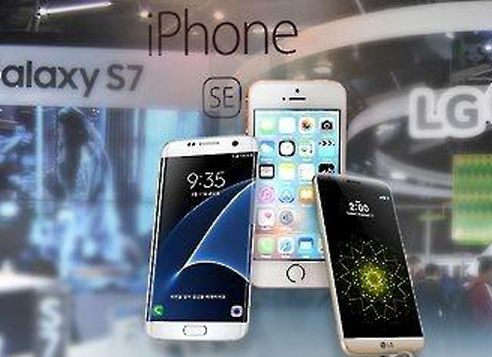 (Yonhap)
Apple led the dual-camera trend by adopting it for its flagship smartphone iPhone 7 last year. The US tech giant is expected to upgrade the dual-camera technology to be used for facial recognition for the upcoming iPhone 8 this year.

Samsung Electronics, for the first time, is also expected to adopt dual cameras for its flagship smartphone Galaxy Note 8 to be unveiled later this year. The Korean firm originally planned to use dual cameras for the Galaxy S8, but later scrapped the idea due to a cost issue.

“Although Samsung did not officially announce the adoption of dual cameras (for the Galaxy S8), it is inevitable to feature the cameras, which stole the spotlight during this year’s Mobile World Congress,” said Park Kang-ho, an analyst at Daishin Securities.

The dual cameras of the Note 8 are expected to include a 3X optical zoom, 12-megapixel wide-angle lens and 13-megapixel telephoto lens, according to industry watchers.

Chinese handset makers, Huawei, Oppo and Vivo, also jumped on the dual-camera trend on strong demand in the nation. Most of the top-selling premium smartphones in China in the first quarter were dual-camera phones, including Apple’s iPhone7, Huawei’s Mate 9, Mate 9 Pro and Vivo’s Xplay 6, according to Hong Kong-based research firm Counterpoint research.

LG Innotek and Samsung Electro-Mechanics are expected to benefit from the rising demand, experts said.

Analysts made rosier predictions about LG Innotek’s annual sales this year, as it is reportedly to supply dual-camera modules for facial recognition amounting to 200 billion won for Apple’s iPhone 8 this year.

“LG Innotek will see sales rise from the third quarter due to the rollout of the US client (Apple) and will see record-breaking operating profit in the fourth quarter,” said Kim Dong-won, an analyst at KB Securities.

LG’s rival Samsung Electro-Mechanics made a turnaround in the first quarter -- supplying dual cameras for Chinese handset makers Oppo, Vivo and Xiaomi -- after marking losses from the discontinued sales of the Note 7 in the fourth quarter last year.

The parts company is also expected to see significant sales rise in its optical unit due to the rollout of Galaxy Note 8, which is reportedly to adopt dual cameras for the first time.