The newly elected president has also issued a directive to allow a song, banned under the previous conservative administrations, to be sung at the upcoming event that marks the 1980 pro-democracy uprising in Gwangju. With the presidential order, “March for the Beloved” will likely be sung for the first time in nine years.

“The president has ordered a withdrawal of state-published history textbooks,” presidential secretary Yoon Young-chan said in a briefing. “The decision shows Moon’s firm will to block any attempt to use history education for political purposes.”

Textbooks were to be introduced at middle and high schools nationwide in 2018. 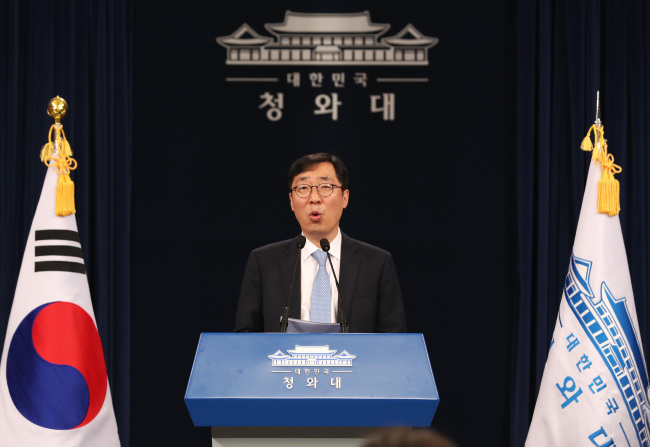 Chief press secretary Yoon Young-chan speaks at a press briefing at Cheong Wa Dae in Seoul on May 12, 2017 (Yonhap)
With the withdrawal, schools choose from books published by state-approved private publishing companies and written under some guidelines of the government, according to Yoon.

The plan faced immediate backlash from liberals and local schools as an attempt to glorify the military regime of Park’s father, President Park Chung-hee.

“As (President Moon) remains strongly against Park’s education policies, he is willing to reform them one by one, including the shift from the controversial state-authored textbooks,” Ministry of Education deputy spokesperson Jeong Seung-hwa told The Korea Herald.

Also on Friday, Moon accepted the resignation of Prosecutor-General Kim Soo-nam, who tendered his resignation a day earlier.

Yoon said the president had agonized over Kim‘s resignation. He had seven months left in his two-year tenure.

“But in the face of an unprecedented impeachment of a president and the launch of a new government following an early election, the president decided to respect Prosecutor-General Kim’s decision to resign so as not to place any burden on the new government,” the presidential official said.