US has expressed no desire to alter the terms of an agreement with South Korea to deploy the THAAD missile defense system, a senior South Korean official said Tuesday, following a dust-up over who should pay for the $1 billion system.

US President Donald Trump sparked a firestorm in South Korea with his repeated demand that Seoul pay for a THAAD unit installed in the country to bolster defenses against North Korea. The demand runs counter to an agreement under which US pays for the system while the South hosts it and provides land. 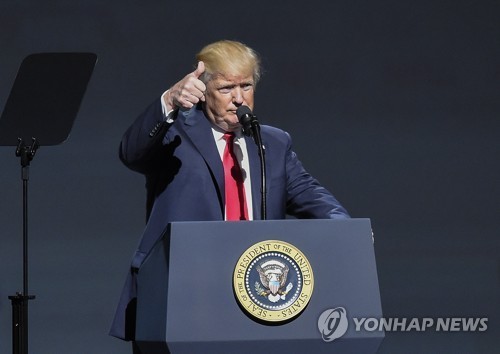 (Yonhap)
The office of South Korea's national security adviser said after a phone call with US National Security Advisor H.R. McMaster that US promised to abide by the existing agreement, but McMaster later gave a different account, saying that what he said during the call was that the US will stick to the agreement "until any renegotiation."

"It is true that there has been no desire (expressed) or consultations (between the two countries) to change the existing agreement," a senior South Korean official told reporters on the condition of anonymity.

"The same is with FTA," the official said.

The remark means that US has not expressed its desire to renegotiate the free trade agreement with South Korea despite Trump's assertion that he would renegotiate or terminate the deal.

Trump made the remark in an interview with Reuters last week, denouncing what has been touted as an economic alliance between the two countries as "horrible." (Yonhap)