[ The Korea Herald – Send E-mail ]
Clinton: US should be careful about negotiations with N. Korea
By Im Eun-byel
Published : May 3, 2017 - 10:41
Updated : May 3, 2017 - 10:41
US should be careful about holding negotiations with North Korea, former US Democratic presidential nominee Hillary Clinton said Tuesday, after President Donald Trump said he would be "honored" to meet with the North's leader under the right circumstances.

"The North Koreans are always interested, not just Kim Jong-un but his father before him, were always interested in trying to get Americans to come to negotiate to elevate their status and their position. And we should be very careful about giving that away," Clinton said at a Women for Women International event. 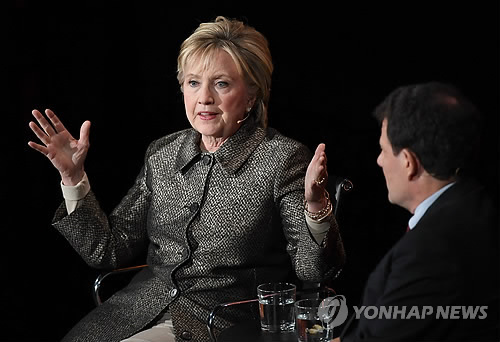 (Yonhap)
"Negotiations are critical, but they have to be part of a broader strategy, not just thrown up on a tweet some morning that, 'Hey let's get together and, you know, see if we can get along and maybe we can come up with some sort of a deal.' That doesn't work," she said.

On Monday, Trump said in an interview with Bloomberg News that he would be "absolutely" willing and "honored" to meet with North Korean leader Kim Jong-un if such a meeting takes place "under the right circumstances." The use of the word "honored" raised eyebrows.

Clinton said the US shouldn't offer dialogue "in the absence of a broader strategic framework to try to get China, Japan, Russia and South Korea to put the kind of pressure on the regime that we will finally bring them to the negotiating table with some kind of realistic prospect for change."

She said North Korea is a "wicked problem" that needs regional efforts.

"There has to be a regional effort to basically incentivize the North Korean regime to understand that it will pay a much bigger price regionally, primarily from China, if it pursues this reckless policy of nuclear weapons development and -- very dangerously for us -- the missiles that can deliver those nuclear packages to places like Hawaii and eventually the West Coast of US," Clinton said.

"So I take this threat very seriously but I don't believe we alone are able to really put the pressure on this North Korean regime that needs to be placed," she said. (Yonhap)