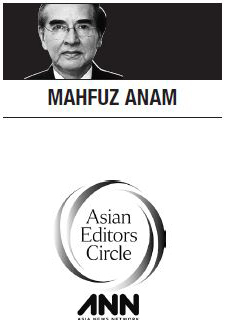 Sheikh Hasina’s upcoming visit to India from April 7-10 is turning out to be perhaps her most important bilateral visit to a country that surrounds Bangladesh from three sides, making it the only neighbor in all but physical sense.

It is now known that the Bangladeshi leader turned down the Indian request for a 25-year defense treaty. In its place there will likely be a memorandum of understanding on several related issues including purchase of equipment and weapons needed for UN peacekeeping, disaster response and management, land mine detector, spare parts for Russian Migs, etc. For all this India appears willing to extend $500 million in credit.

Indian leaders, policymakers and even the media agree that Sheikh Hasina’s government has gone far beyond the extra mile possible to improve Bangladesh-India relations.

In the Times of India, Subir Bhaumik, a former BBC correspondent and a frequent commentator on India-Bangladesh relations, wrote, “Hasina has been steadfast in her support of Modi government’s ‘isolate Pakistan’ drive, her government has cracked down hard on northeastern rebels and Islamist militants, on fake currency rackets and Pakistani agents to address Indian security concerns. She has cleared transit for Indian goods to the Northeast through Bangladesh territory and addressed most of India’s connectivity concerns seen as crucial to success of India’s Look East policy.

As Hasina prepares for her Delhi visit, Indian and Bangladeshi officials are trying to finalize a deal to allow Indian use of Chittagong and Mongla ports for accessing the northeast.”

What Bhaumik did not mention, and one that India truly needs to be grateful to Sheikh Hasina for, is her determined and successful effort to dismantle all the camps of the insurgents from the Northeast that Khaleda Zia’s government had allowed in a mistaken policy to keep ‘pressure’ on India. Over time these insurgents had become a genuine worry as their destructive power rose with sanctuary on Bangladesh’s side of the border. Thankfully, that is now history.

Not to be forgotten or its importance underrated is how Sheikh Hasina’s government has changed the narrative from “India, the hegemonic oppressor” to “India, the development partner” ever since she came to power in 2009. I was a part of the entourage to the Indian capital in January 2010, when the Awami League chief risked her political future and took a leap of faith and signed a very comprehensive agreement with India in which, in one go, she responded to most of India’s important demands without getting any of Bangladesh’s demands met. Her faith has so far worked only partially in terms of duty free access of Bangladeshi goods in the Indian market, a major demand from our side. The story on energy cooperation is also good.

However, the biggest frustration remains in the crucial area of water sharing, especially of the Teesta. Bangladesh stands greatly disappointed on this score as no tangible progress has been made since it was aborted at the very last minute on the eve of Prime Minister Manmohan Singh’s last visit in September, 2011. India’s complex and controversial river-linking project hangs on Bangladesh’s head as a possible doomsday scenario with unknown implications for our ecology. India appears not to sufficiently appreciate the fact that all of Bangladesh is a delta and we survive only if our rivers do.

All Sheikh Hasina’s efforts appear to be now in jeopardy as India seems to be quite concerned about her China policy which resulted in the latter’s increasing presence not only in Bangladesh’s development projects but also in the sensitive area of military equipment purchase.

China has been by far the biggest source of defense purchase for Bangladesh for many years, ever since the coming of military in power in 1975, reinforced in 2002 when former prime minister Khaleda Zia inked a comprehensive umbrella agreement during her visit to China.

What perhaps set the alarm bells ringing loud in New Delhi was the procurement of two refurbished Chinese submarines which brought the Indian defense minister for his maiden visit and the push for a 25-year defense pact proposing enhanced cooperation between the two militaries and insisting on purchase of defense equipment from India.

In Bangladesh the usual pattern of politics was to have improved relations with China when Khaleda Zia came to power and a distinct cooling of it when Sheikh Hasina formed the government accompanied by a pronounced tilt towards India.

Since coming to power in 2009 Sheikh Hasina has changed all that. For the first time the present prime minister, to her considerable credit, was able to forge uniquely close relations with India while simultaneously making China a major development and investment partner.

So how should India view Bangladesh’s rising closeness with China? With suspicion or with maturity? Should India insist on countering the imagined Chinese ‘influence’-- imagined because China has in no way been able to influence our policy of friendship towards India -- by forcing a ‘defense treaty’ or ‘greater defense cooperation’ on Bangladesh? Will such enhanced cooperation give India any additional strategic benefit than it already enjoys?

Bangladesh needs India as a close ally and friend. But it also needs China as a significant development partner. It is unrealistic on India’s part to expect any government in Bangladesh not to try to reach out to China while pursuing a very close relationship with India.

Over the many decades that Sheikh Hasina has been in politics and the several years she has been in power she has been consistent in her policy of good relations with India. What is new is her success to reach out to China. Instead of looking at it with suspicion India should repose trust on Bangladesh as a reliable ally and see her policy towards China as contributing to regional stability and bringing two Asian giants closer.

If there is to be an Asian century it will have to be built both by India and China and it has to benefit their smaller neighbors. Stability is the key to Asia’s future and that stability can only be guaranteed by India and China coming closer, which they are doing through a bilateral trade aiming to reach a $100 billion in the near future and billions of dollars investment in each others’ countries. The idea of exclusive sphere of influence of each of these Asian giants with “No Entry” sign for the other is an outdated concept and one that is doomed to failure in this digital age.

A new element in our regional equation is the overt hostility of President Trump towards China and his declared policy of confronting the latter in the South China Sea. What effect Trump’s policy is likely to have on Narendra Modi’s resurgent Hindu nationalist government, especially on the hawks of the party? Will the US President’s anti-China policy encourage India to push for an anti-Chinese policy on her neighbors? Will India see Trump as an opportunity to upstage China in South Asia, especially because of China’s support for Pakistan remains strong while India’s relations with the latter has dipped to its lowest ebb?

The question for us is, how will Trump’s anti-China policy affect India, and how will it play out in South Asia, especially on India’s attitude towards Bangladesh?

Whatever it is, Bangladesh should never allow itself to be drawn into the India-China rivalry. We want India to be our ‘closest friend’ but ‘not our only friend.’ Sheikh Hasina’s commitment to good relations with India is beyond question. So why should her reaching out to China be seen with suspicion? She has also reached out to Russia and our ties with this re-emerging superpower, and a significant partner in our Liberation War, is far better than it has ever been since 1971.

As Sheikh Hasina’s visit comes closer, India must seriously think how to forge a new, dynamic and win-win relationship with its emerging neighbor in the East.

Mahfuz Anam is editor and publisher of the Daily Star published in Bangladesh. -- Ed.