Don’t believe everything you read online

Type in the keyword “Korea” at Namuwiki, one of the most popular Korean wiki websites, and you will find detailed information on the country along with some minor asides.

“It was mentioned in US sitcom ‘Friends’ as a country with sad and beautiful history, and LOTS OF KIMS. (Surely there are lots of them),” it says.

While the unorganized description, attention to miscellaneous details and spoken-style remarks may be confusing to some users, this is how many of the wiki pages operate: A community and information-sharing website among people who share common interests.

Because anyone can edit them, such pages are vulnerable to vandalism or having false information added to them. But as they grow and more people have access to them, those unfamiliar with the concept are relying on them for studies and reports.

The result is fake information jumping past the border of wiki sites and into mainstream media. 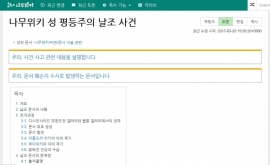 A casual internet search using Google Scholar yielded dozens of studies citing Namuwiki as a source for their papers.

These are not just papers submitted by desperate college students scraping the internet for something to fill their word counts; they include academic journals published by legitimate organizations like the Institute for EU Studies at Hankuk University of Foreign Studies.

“It’s ironic because not even the heavy users themselves would think of it as an encyclopedia” said Park Byung-ho, a professor at KAIST’s graduate school of information and media management. “But the people who accessed the pages by searching the internet may think, ‘Well that’s pretty useful (information)’.”

It’s not difficult to see a Korean youngster browsing through wiki pages, lost in a sea of information that is easy to access. Within a page is a word highlighted in blue -- indicating a direct link to another page -- and before you know it, you can spend hours browsing through various pages.

“Mostly, it’s because it’s fun. When I’m by myself and have nothing to do, I can always access the Namuwiki and look at the pages,” said 30-year-old office worker Kim Han-ho.

Most of the people adding information are people like Kim who, while well educated, are not professionals. Phrases like “It is a popular belief,” “Many believe,” “It is common sense to say,” are used to convey one’s personal belief.

What is and is not edited out is decided by how popular it is, not by the accuracy of the information.

“Many times, the users get embroiled in what is called ‘editing war,’ in which people erase the information they don’t like and fill the pages with their own opinions. Whoever is tenacious enough to keep on editing wins,” said Kim.

Such case is not confined to Korean wiki pages. Even Wikipedia is often subject to “editing wars” when dealing with controversial topics.

Wikipedia’s “history” page on US President Donald Trump shows that the entry has been repeatedly edited to add content favorable to, or against the controversy-ridden leader.

Among the most glaring problems for wiki pages is that their convenience sometimes blinds the users from realizing how groundless the information they provide can be.

In one of the most bizarre incidents, an unidentified user last year on Namuwiki posted a nonexistent concept called “Equalism” -- as opposed to the general concept of equality -- that supposedly was coined in 1996 as an idea to replace feminism.

What started as an under-100 word page quickly grew as other users added details like actress Emma Watson allegedly mentioning it in a speech, “10 commandments of Equalism” and how it is referred to as “Equalitarianism” in the “Western academic circles.”

The truth -- that “Equalism” did not in fact exist as a concept -- was revealed in January and the “Equalism” page was substituted with one explaining the incident involving the false claim. However, inaccurate information about the so-called “Equalism” concept had already spread to numerous Namuwiki pages on gender issues.

How fast the information spread without the users realizing it was fake is an alarming sign of the potential danger of online wiki pages.

Professor Park said such phenomenon is common when a new type of media or information is presented to the public.

“Back when email was first introduced, there was widespread sentiment that any information that one got through email was legitimate. A few years back, Q&A section on Naver or Daum were regarded as credible even though anyone could give an answer,” he said. “The public tends to overestimate (the credibility of) novel methods.”

Many wiki pages do not have a person who can be held accountable for their content. Namuwiki itself claims to be run by a Paraguay-run company called umanle S.R.L., about which no information is provided on Namuwiki.

The operators of Namuwiki could not be reached for comment for this article as the page provided no contact information.

Park stressed that it is important for the general public to realize that the wiki pages are not a credible source of information and that they have always been intended as a “playground” for sharing tidbits about pop culture.

“Namuwiki and its forerunners were never intended to replace the pre-existing encyclopedias. Rather it was a form of community that the users created to just enjoy, joke and have fun among themselves,” he said.