The 139-strong unit, composed of the Navy's UDT/SEAL and other special operation forces, will carry out the duty of helping train the Middle Eastern country's special forces and protect South Korean residents there in case of an emergency, the ministry said in a statement. 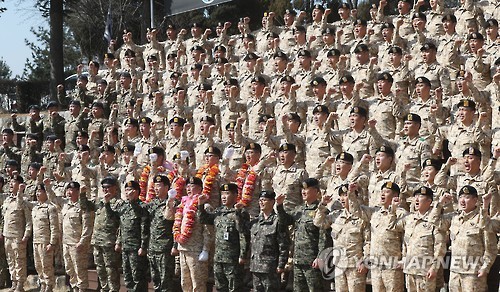 In this photo taken on March 10, 2017, and provided by the Army, the 12th team of soldiers bound for the UAE shout slogans in a send-off ceremony at a special operation forces unit in Gwangju, just southeast of Seoul. (Yonhap)
The unit is known as "Akh," an Arabic word meaning "brother."

It is one of the four South Korean military units operating overseas for peacekeeping, restoration, anti-piracy and training missions. Three others are the Hanbit Unit in South Sudan, the Dongmyung Unit in Lebanon and the naval Cheonghae Unit that is stationed off Oman's coast.

A total of 1,600 Akh Unit soldiers have been dispatched to the UAE for training and protection duties since January 2011.

South Korea has been building four reactors in the UAE under a 2009 deal worth $20.4 billion that marked South Korea's first export of nuclear reactors. (Yonhap)