[ The Korea Herald – Send E-mail ]
[Eye] Star TOEIC instructor jumps on video streaming bandwagon
Kim Dae-kyun experiments with AfreecaTV and social media to rebrand himself
By Korea Herald
Publiished : Mar 3, 2017 - 18:32
Updated : Mar 3, 2017 - 18:32
On a chilly evening in February on the third floor of Freec Up Studio in Samseong-dong, only a handful of people were roaming across the hall packed with meeting rooms and studios.

In one relatively spacious studio fitted with big computer screens, cameras and lighting gear, Kim Dae-kyun was getting ready for a big night, even though he had only two official guests and a small number of production staff were behind some broadcasting equipment. 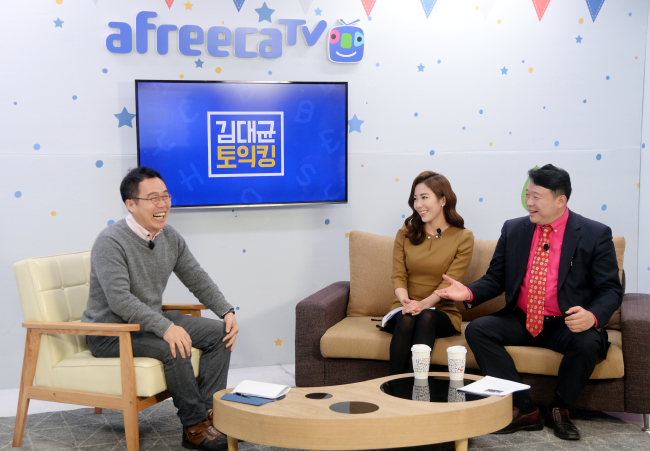 From left: Kevin Seo, CEO of AfreecaTV; Diana Jung, a freelance announcer; and Kim Dae-kyun, a TOEIC instructor and host of a weekly AfreecaTV program (Park Hyun-koo/The Korea Herald)
It was an important night for Kim, a star TOEIC instructor, as one of his guests was none other than Kevin Seo, the CEO of AfreecaTV, Korea’s biggest video-streaming company. AfreecaTV runs the special studio for its streamers, many of whom rose to fame through “meokbang” -- eating shows -- or talents in gaming.

English-learning broadcasts, such as the one hosted by Kim, are still a new territory. And it is quite rare for CEO Seo to join a live show as a guest.

When the broadcast signal was turned on, Kim launched into his usual greeting and started a mixture of a TOEIC lecture and a live talk session with his guests. He interacted smoothly with Seo and another guest Diana Jung, a freelance announcer, while checking the stream of comments by viewers.

The program was live streamed to viewers via mobile and PC networks. For nearly two hours, the trio solved dozens of TOEIC questions together with viewers, cracking jokes and sharing tips to better learn English.

Seo is interested in expanding the content library of AfreecaTV -- currently focused on gaming -- to a wider range of areas such as education.

He said the format Kim is using has strong advantages. “People often give up learning foreign languages because too much focus is placed on tedious instructions. In contrast, the AfreecaTV platform is interactive and people can freely join the broadcast to share their views and learn English in a natural way,” Seo told The Korea Herald.

It was Seo’s idea that AfreecaTV should start promoting non-gaming content on its platform about three years ago. 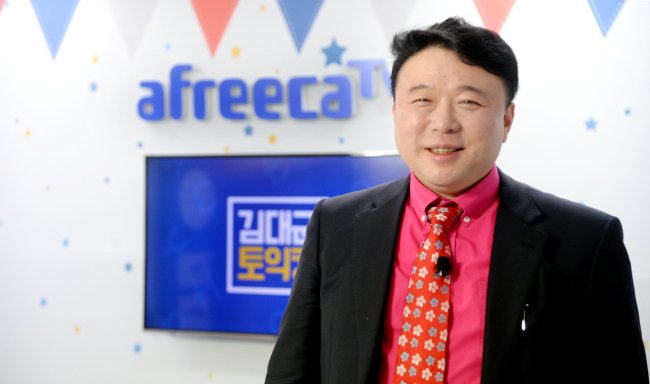 Kim Dae-kyun (Park Hyun-koo/The Korea Herald)
Kim, widely regarded as one of the top TOEIC instructors in the nation, stumbled upon AfreecaTV’s new initiative thanks to his long-running role as a host of a TOEIC education radio show on EBS.

“It was late August 2015 when I first started AfreecaTV broadcasts,” Kim said in an interview with The Korea Herald. “At the time, EBS was experimenting with new platforms and my radio program’s producer recommended me to try out the AfreecaTV program.”

It was a risky step for Kim. Although he is a famous TOEIC instructor with years of teaching experience, interacting with audiences in their 20s familiar with AfreecaTV’s live streaming was a huge challenge, and whether he could get any real benefit from his experiment appeared, at best, fuzzy.

AfreecaTV offered not only technical support but also much-needed publicity to Kim’s weekly program by placing a related banner ad on the front page of the company’s mobile and PC websites.

Kim ran the program with a variety of guests.

“It was difficult to come up with TOEIC questions for viewers and at the same time prepare myself for a changing list of guests,” Kim said.

In the initial period, Kim hosted the streaming program at an EBS production studio. Later, he moved to AfreecaTV’s rental studio. In recent months, Kim has been using his own streaming studio set up at his TOEIC institute in Seoul to broadcast his regular show every Tuesday from 9-11 p.m. Once a month, he uses AfreecaTV’s Freec Up Studio to deliver a special show.

When Kim first dabbled in the AfreecaTV broadcasts, the reception was not entirely positive. After all, he is a top English instructor, specializing in TOEIC, and he had no reason to work for a streaming service.

Kim, born in 1964, started his career as an English instructor in the mid-1990s. For 18 years, at a private language institute in Jongno, central Seoul, he had helped students and adults prepare for TOEIC, which is a de facto general-purpose English proficiency test in Korea, even though the test was originally designed for measuring business English proficiency.

Kim’s expertise in TOEIC comes from his efforts to keep up with the latest trends of TOEIC question types. Since January 1997, he has been taking every TOEIC test. The number of TOEIC tests Kim has taken surpasses 230 and there’s no competitor in sight to break his record.

Kim has published many best-selling TOEIC books for test takers, some of which are now available in Japanese. His online lectures as well as his EBS program are popular among students and adults trying to get higher TOEIC scores to land a job or get promoted.

As far as his business is concerned, things look good. But Kim thinks there is a major disruption looming large. TOEIC, for one, is going through drastic changes in its status as a leading yardstick for English proficiency. The number of new jobs at companies big and small is dwindling to a dangerous level. Even top university graduates with near-perfect TOEIC scores remain jobless. The number of people taking the TOEIC tests used to top 2 million per year in Korea, offering plenty of opportunities for English teachers. Now, ETS, which runs the TOEIC tests, has stopped disclosing the annual figure for the Korean market, suggesting a drop in test takers, or at least sluggish trends.

Adding more pressure on the already weakening position of TOEIC here is the growing number of companies that do not take the TOEIC scores seriously when hiring new workers. The Korean government also plans to lower the importance of English in college entrance exams.

Another ominous trend is the massive shift in English education from offline to online platforms. The number of students attending offline English institutes in Seoul and elsewhere is shrinking fast, while more and more people sign up for online video lectures.

For Kim, all the signs are pointing to a dramatic change that might undermine his standing and business in the coming years. This is why he jumped into AfreecaTV and social media such as Twitter and Facebook.

“The difficulty level of TOEIC has gone up,” Kim said. “But the fundamental thing is that even though you have a high TOEIC score, it’s very difficult to get a job, so students think of TOEIC as something that they should take care of in two to three months.”

The changes affecting the status of TOEIC and the diversification of media channels, especially in favor of video platforms such as Youtube and AfreecaTV, combine to pose a challenge to Kim and other English teachers.

Kim’s venture into a streaming service, in hindsight, was a good bet.

The sales of his books have gone up and the rating of his radio show also remains solid since he started the AfreecaTV program.

Kim recently received an offer to teach at Sejong Cyber University as a professor, partly due to the greater publicity he generated with his streaming program and social media activities -- a welcome development that suggests there might be something else in the future besides TOEIC for those willing to broadcast themselves live.