Vietnamese Doan Thi Huong, 29, and Indonesian Siti Aisyah, 25, have been charged under Section 302 of the Penal Code, which carries the mandatory death penalty upon conviction, for the murder of a North Korean on Feb 13.

In the charge sheet, she was accused, together with four men still at large, of murdering a “Kim Chol” at the Kuala Lumpur International Airport 2 (KLIA2) departure hall in Sepang. 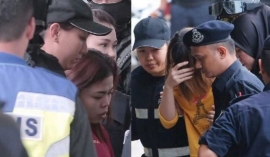 (Image captured from The Star footage)

“Kim Chol” is the name that Kim Jong-nam, the half-brother of the country’s leader Kim Jong-un, usually travels under.

Siti Aisyah allegedly committed the offence at 9am on Feb 13.

The charge was read out to her in Indonesian through an interpreter.

She nodded her head, signalling that she understood the charge.

No plea was recorded.

Deputy public prosecutor Muhammad Iskandar Ahmad asked the court for one-and-a-half months before the next mention date to transfer the case to the Shah Alam High Court.

Gooi Soon Seng, who represented Siti Aisyah, applied for the court to grant a gag order against the police and potential witnesses from issuing statements to the press that could incriminate or compromise his client’s case.

“This application is to ensure her right to a fair trial is not compromised.

“Those statements are subjudice,” Gooi said.

After Siti Aisyah was led out of the courtroom, Doan was brought out before the judge.

She was charged, together with four men still at large, with the same offence, at the same time.

Her charge was read out in Vietnamese. Doan said she understood the charge. No plea was recorded.

DPP Muhammad Iskandar asked for a joint trial for both cases at the Shah Alam High Court.

The court allowed the application and fixed April 13 for mention.

Jong-nam was killed at KLIA2 on Feb 13 after two women swabbed him with a chemical that has since been identified as the VX nerve agent.

Doan was arrested on Feb 15 as she was attempting to catch a flight back to Vietnam, while Siti Aisyah was detained early the next day.