Special prosecutors plan to indict up to 15 more suspects later this week on the final day of their investigation into a massive scandal involving President Park Geun-hye and her confidante, their spokesman said Monday.

The independent counsel team is set to end its 70-day probe on Tuesday as Acting President and Prime Minister Hwang Kyo-ahn refused to extend its legal term on Monday. 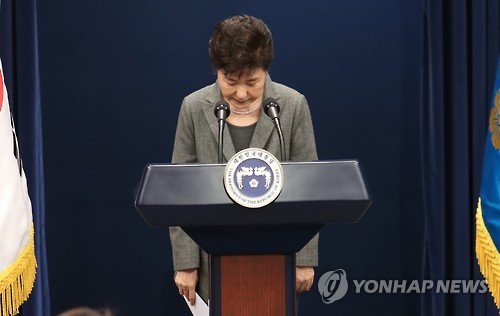 This file photo taken on Nov. 29, 2016, shows President Park Geun-hye bowing after addressing the nation over a political scandal involving her and her longtime friend Choi Soon-sil at the presidential office in Seoul. (Yonhap)
Spokesman Lee Kyu-chul said the team will indict 10 to 15 people in addition to 13 suspects currently on trial over their involvement in the mega scandal that led to President Park's impeachment late last year.

Samsung Group's de facto leader Lee Jae-yong, who is in custody, and other senior executives are expected to be charged with bribing Park's jailed friend Choi Soon-sil.

A former university president suspected of offering favors to Choi's daughter and a doctor believed to have provided unauthorized medical treatments to Park are also likely to face indictment.

The negotiations for a face-to-face interrogation of Park fell apart due to the two sides' difference on how to secure transparency and fairness in the course of the questioning, the probe team's spokesman told reporters during a regular press briefing.

"The independent counsel team wanted to record and videotape (the interrogation) to prevent unexpected situations in the course of the interrogation, but the presidential side maintained that they cannot accept recording or videotaping," Lee said. "It was a decisive factor in the failure (to reach an agreement on the questioning)."

Park's lawyer Yoo Yeong-ha immediately released a statement and said the plan foundered because of the "unacceptable" request from the investigation team.

"Under the law, there should be consent from the interviewee (who is not a suspect) in order for investigators to videotape the questioning," Yoo said in the statement. "The independent counsel team insisted on recording and taping the procedure in order to shift the blame (of the failure to carry out a questioning) to the president's side."

The two sides had been discussing when and how to carry out the unprecedented inquiry of the country's incumbent president after their first attempt ended in failure earlier this month.

They originally set the questioning date for Feb. 9, but it was nullified after Park's side accused the prosecutors of leaking the schedule.

The investigation team also decided to return the court-issued warrant to raid the presidential office. Its search and seizure attempt on Feb. 3 was halted by presidential aides due to security reasons.

"We very much regret that we could not execute a warrant legitimately issued by the court and urge for a legislative solution, as suggested by the court, to prevent similar cases happening down the road," Lee, the spokesman said.

Meanwhile, a Seoul court rejected an arrest warrant sought by the investigation team against Lee Young-seon, a presidential aide alleged to have helped the president receive unauthorized medical treatment. Lee is suspected of colluding with Choi to let some "unofficial" doctors enter the presidential compound Cheong Wa Dae without proper security checks.

He is also accused of opening about 70 mobile phone accounts under other people's names that were used by Cheong Wa Dae officials.

"It's hard to admit the need and cause to arrest him," given his alleged crime in the warrant, related evidence and no difficulty in locating him, said Kwon Soo-ho, a judge at the Seoul Central District Court. (Yonhap)