[ The Korea Herald – Send E-mail ]
Is South Korea thawing to conscientious objection?
Conflicting court rulings give ray of hope for religious rejecters of conscription
By Korea Herald
Published : Dec 19, 2016 - 18:04
Updated : Dec 19, 2016 - 18:22
Lee Yong-suk, a fervent peace advocate who objects any form of violence, never imagined himself behind bars. But in the summer of 2006, that’s exactly where he ended up.

He was sentenced to 18 months in jail for refusing to join the Army and fulfill the country’s mandatory military service.

“A strong army has never prevented war. A military is to win wars, not to get rid of them,” said Lee, who is now an activist for anti-war nonprofit group World Without War. 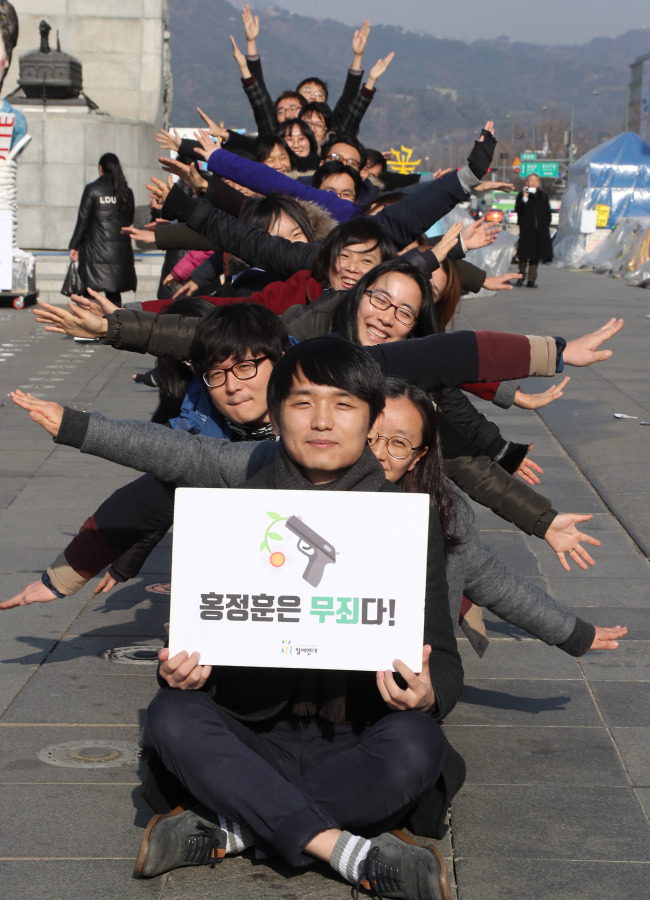 Hong Jeong-hoon, an activist affiliated with the progressive People's Solidarity for Participatory Democracy, holds a performance at Gwanghwamun Square on Dec. 13 after announcing his conscientious objection to the state military service. (Yonhap)
Lee is among one of the 18,700 “conscientious objectors” in South Korea who have gone to jail for refusing to serve in the armed forces on the grounds of freedom of thought, conscience or religion since military service became compulsory for all able-bodied men during the 1950-53 Korean War. In a country still technically at war with North Korea, those who reject conscription have so far found little hope of leniency in a court.

Just like Lee, they have been uniformly sentenced to 18 months in prison. Their plea for alternative ways to serve the country has repeatedly been nixed by the court and the government, as well as a majority of the public.

But some see a ray of hope that South Korea may be finally thawing to those who would rather choose to go to prison than raise arms.

Their hope is that the Constitutional Court, currently reviewing the issue for the third time, may deliver a groundbreaking ruling in favor of those like Lee, reflecting the change of legal perceptions evidenced by nine acquittals at lower courts this year alone.

A vast majority of those who refuse to do their conscription in South Korea cite religion, with Jehovah’s Witnesses being the most common among them.

“It’s not a question of whether or not I ‘oppose’ the military, it’s because I felt it was wrong to participate as a Christian,” said Lee Che-rin, a 26-year-old freelancer. “We are taught to love even our enemies.”

Like other conscientious objectors, Lee was jailed in September of 2013.

“I would have been ready to do anything, even if it meant I would spend twice the time (compared to military service) in alternate service. I would be thankful if they (the government) would provide a system for us to do what we can,” he said.

The South Korean government requires all able-bodied men to serve in the military for at least 21 months.

It is a core part of the country’s defense against the North, as its Army of 650,000 men face 1.1 million troops of the communist state across the heavily fortified border since the war ended with a cease-fire, not a peace treaty.

Once enlisted, conscripts can be assigned to alternative services, such as working at community centers as support staff. But a month of combat training is still mandatory for all, which is the reason for the conscientious objection.

Many in South Korea agree that a country should respect one’s individual beliefs. But when it comes to guarding their home against North Korea, which appears to be racing toward nuclear armament, national defense should come before individual rights, they say.

“I don’t think a religion should be above the law, as the law should be applied fairly to everyone. Hardly anyone ‘wants’ to go to the military, why should they (conscientious objectors) be granted a favor?” posed 30-year-old Yoo Kyung-min, who works for a pharmaceutical company.

The majority of Koreans seems to share Yoo’s sentiment. According to a survey by Gallup Korea in May, 72 percent of the respondents said they “cannot understand conscientious objection.”

But just as many as those against conscientious objection are open to the idea of allowing them other ways to serve. The same survey found that 70 percent agreed to the introduction of an alternative to the compulsory military service.

Among countries that have military conscription, some countries, like Austria, Denmark and Finland, allow alternative services.

Lawyer Oh Du-jin, who has represented several conscientious objectors in the past, argues that freedom of conscience and the duty of national defense, both prescribed in the Constitution, do not have to conflict with each other.

“I am not saying that the military duty is worthless. I’m suggesting (the government) should make use of the people they can’t make into soldiers by making them do other things for society,” he said.

“South Korea hands out punishment indiscriminately to everyone who says they cannot serve in the military,” he said. “A person who refuses military out of faith should be given another way to serve.”

However, the Ministry of National Defense says it is premature to consider an alternative service program, given the growing threats from North Korea.

“Introducing alternative services for those refusing military service can be used as means for draft-dodging, while dampening the morale of servicemen,” said a ministry official.

“The public sentiment and national security has to be considered before reaching a decision (on alternative service.)”

In a country where roughly half of the population has been, or will be, enlisted, draft evasion is a near taboo that can destroy one’s reputation and career.

Korean-American singer Yoo Seung-jun, also known as Steven Yoo, saw his career and fame quickly implode in the early 2000s when he flip-flopped on his word that he would serve in the military.

Conservative presidential candidate Lee Hoi-chang had his campaign helplessly bogged down by allegations of his son evading conscription and was eventually defeated by liberal contender Roh Moo-hyun in 2002.

“I still find it hard to get a job because I never served in the military, which is why I’m still a freelancer,” he said.

Last month, the National Human Rights Council of Korea formally delivered to the Constitutional Court its position that an alternative service is necessary for those who object to military service based on their beliefs.

“We reconfirm our previous stance that the right to reject military service based on one’s beliefs falls under the freedom of conscience stated by the Constitution and international regulations, such as the International Covenant on Civil and Political Rights,” it said in a statement.

Although the NHRCK made similar recommendations in 2005 to the National Assembly and Defense Ministry, its renewed call for an alternative service program has raised expectation the Constitutional Court may act to end the decadeslong predicament of conscientious objectors.

The highest court has ruled against conscientious objection twice, in both 2004 and 2011, prioritizing national defense over individual rights.

Its third ruling on the matter is expected as early as this month, nearly five years after a petition was filed in 2011.

Signs of change have been almost unmistakable in the judiciary in the past few years. This year alone, nine courts -- all lower courts -- ruled in favor of conscientious objectors.

“When there are two values, we cannot just accept one and reject the other. It would not be fitting with the value of our Constitution,” the court said in its ruling.

But the result was soon tainted by a ruling delivered a fortnight later by another high court in Suwon, which found two conscientious objectors guilty of draft dodging.

“Their refusal to serve in the military does not constitute the just cause permitted by the Military Conscription Law,” the court said, refusing to comment on the issue of alternative service.

“The freedom of religion and conscience is a constitutional right. To impose criminal punishment infringes upon one’s freedom. I hope the Constitutional Court would serve as the last bastion of human rights,” he said.

“It’s not just a political issue. It is about the very essence of humanity that a human being should be treated with dignity in whatever situation.”

Since 1991, the United Nations Human Rights Council has recommended South Korea implement an alternative military service program for conscientious objectors, saying the Seoul government is violating a provision of the International Covenant on Civil and Political Rights that guarantees freedom of thought, conscience and religion.

According to the Defense Ministry’s data submitted to Rep. Park Beom-kye of the main opposition Democratic Party of Korea, 3,633 South Korean men refused their mandatary military service over faith or religion from 2010 to 2015. From January to October of this year, 225 people refused to join the military.

As of Aug. 31 this year, some 535 of these conscientious objectors are standing trial.